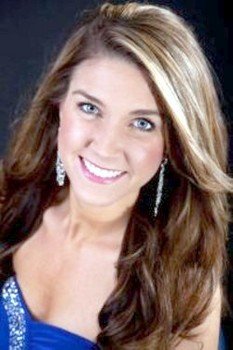 PORTLAND, Ore. (AP) — Miss Oregon gave up her crown Thursday following questions about her residency.
KGW reported Rachel Berry (photo) will not be able to compete in the Miss America pageant next year. She was selected as Miss Oregon last month.
Pageant director Dana Phillips says Berry couldn't prove she had lived in Oregon long enough to qualify for the title. She previously lived in California.
"To compete for Miss America is a dream I have worked toward since I was young, but I accept this decision to do the right thing and relinquish this title," Berry, 24, said in a statement. "In the spirit of what Miss America stands for, I would not want to deprive another contestant of the opportunity to represent the beautiful State of Oregon at the Miss America Pageant."
Instead, the runner-up Nicole Mead, 24will compete in Las Vegas in the January pageant, KGW reported.
Pageant rules require contestants to live in Oregon for six months before competing in a local preliminary competition. Berry was crowned Miss Willamette Valley in April.
Last week, KATU questioned her eligibility for that pageant, noting she registered her vehicle and got an Oregon driver's just one month before the Miss Willamette Valley competition.
Phillips, the pageant director, told the station Berry provided a lease for a home outside Portland signed Jan. 1, 2012 — less than four months before the preliminary contest.
Berry denied wrongdoing. "I'm a person of integrity and wouldn't do anything to jeopardize that," Berry told KATU last week.