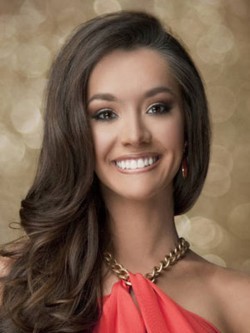 DaNae Couch (photo) will represent Texas at the Miss America 2013 pageant. She was crowned Miss Texas 2012 Saturday night at Allen Event Center in Allen, TX. Couch, 23, is from Coppell. She entered the pageant as Miss Dallas.
Her pageant platform is “Hope for Family Recovery: Life beyond Addiction.” Her pageant talent is twirling to "You Can't Stop the Beat."

Couch earned a bachelor's degree in English and public relations at Baylor University and is expected to be awarded her law degree in 2013, according to her Linked in profile.

While at Baylor, she was active in Baylor Ambassadors, Golden Wave Band, Kappa Alpha Theta and Student Foundation.

It was not her first try for the Miss Texas crown.