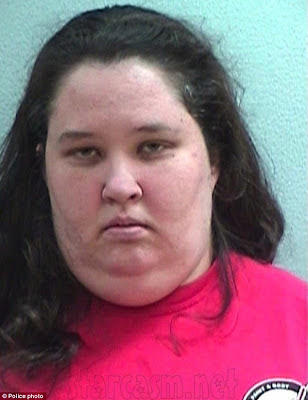 Honey Boo Boo's controversial mother June, the coupon queen, was arrested on January 3, 2008 for theft and contempt of court.
A mugshot of 33-year-old June Shannon (above), the mother of six-year-old Alana Thompson, aka Honey Boo Boo, has surfaced as well as details of her arrest which took place in Henry County, Georgia.
According to Starcasm, there are also additional court reports which show that the mother-of-three was the defendant in two child support cases around the same time, which may explain the theft charges, though it is not entirely clear.
It comes just days after learning that child services made an unannounced visit to her and husband Mike Thompson's family home in rural McIntrye, Georgia in March of this year.
The coupon queen, as she is commonly referred to, was arrested in a location that is more than halfway to Atlanta when measured from her current home, suggesting that she may have been trying to escape police.
The family were visited by the Georgia Division of Family and Children Services in March, according to The National Enquirer.
A source told the magazine that authorities who made the visit 'found reason to bring the case to court' but a 'court-appointed attorney' for June convinced the judge to 'throw it [the case] out'.
The source said investigators were called to the home as a result of June and Mr Thompson's unorthodox, and highly-publicised, parenting methods which include feeding Alana caffeinated drinks as well as roadkill for dinner. Controversy: The parents of pageant star Honey Boo Boo (front) were accused of child abuse according to a new report. June (behind the youngster) and Mike (to the right) and her three sisters, are shown.
The family now star in their own spin-off reality series, Here Comes Honey Boo Boo, which has also showed Alana go mud belly flop diving, adopt a pet pig named Glitzy, attend local food auctions with June and help her buy more than a dozen packets of chocolate milk powder, during one supermarket visit, using discount coupons.
The source added: 'Honey Boo Boo's upbringing raised eyebrows with neighbours.'
The initial visit by authorities is said to have occurred 'shortly after filming began' on the new TLC series which premiered on August 8. It attracted 2.2million viewers.
Although June sparked outrage back in January when she was seen on Toddlers & Tiaras feeding Alana 'Go Go Juice', a mixture of Mountain Dew and Red Bull, the authorities visited the family after catching wind of an online video that showed Alana dancing for dollars in a bar. Secret weapon: The youngster, who was first seen on Toddlers & Tiaras, was fed 'Go Go Juice' by June. The mixture of Mountain Dew and Red Bull was offered to the little girl after she had consumed 15 packets of sugar. Crazy: Once she had consumed the Juice, she was seen spinning around on the floor, her energy heightened Loud and proud: The pageant queen showed off her flabby belly on a previous episode of Here Comes Honey Boo Boo. The child has been shown to feast on roadkill and ample sugary sweets on several occasions.
The video, which can still be found on YouTube, was not filmed by the network however showed Alana in a darkened room, dancing atop of table as coloured lights flash around her.
June defended her daughter's actions by explaining that Alana had been dancing in a college bar, not a sleazy one.
The 'Go Go Juice' incident, which saw Alana being fed the liquid after having downed 15 bags of Pixy Stix, tubes of powdered sugar commonly referred to as 'pageant crack', attracted negative criticism of its own.
June was filmed instructing Alana to take 'two big gulps' from an unlabelled bottle.
Within seconds, the change was apparent and the pageant hopeful was seen rapidly swinging her arms over her head and spinning around on the floor, exclaiming: 'My Go Go juice is kicking in right now!'
Beauty pageant insiders speculate that some mothers' 'special juice' blends may even contain alcohol. Lewd: June was seen in the debut episode of her new reality series, grinding up against a young man Stealing the limelight: June (left) has arguably become more of a focus in the reality show than her beauty pageant star daughter (right). The pair were seen on CNN earlier this month promoting the new TLC show
Describing how the drink made her feel, Alana said: 'Go Go juice makes me laughy, and play-ey, and makes me feel like I want to pull my mommy's hair.'
June has stolen much of the limelight away from her daughter in the new reality series.
During its debut episode, she was seen grinding up against a young man as her daughter played in a giant mud pit.
She has also been filmed taking her family to the supermarket to help her shop using discount coupons and take Alana to their local food auction, June's favourite weekly activity, in order to bid on what appeared to be sugary donuts.
She has also admitted that she is obsessed with 'couponing', labeling it 'better than sex' in a teaser for tonight's new episode of the reality series.
The coupon queen, as she is commonly referred to, continued: 'Couponing is a serious obsession. Anybody who uses coupons will tell you that it is an addiction.'
SOURCE: The Daily Mail, UK, 8/17/2012