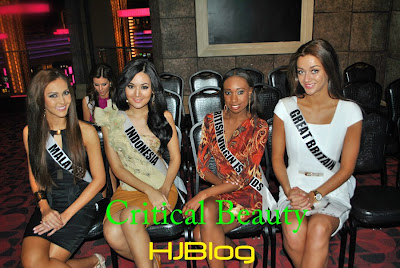 Angola : When I spoke with Marcelina Vahekeni, she seemed very intelligent, very articulate with a very strong personality. Marcelina talks too much. When asked if she thought that she could win the crown, she said that she is sure that she will not win Miss Universe, because the current Miss Universe Leila Lopes is also from Angola. She came to Las Vegas to represent her country well but also to have fun, and to enjoy this new experience of her life. A little birdie told me that the Miss Universe Organization gave her the opportunity to select the photos of her that she would like posted on the official website of the organization, but when she visited the website she noticed that less flattering photos of her had been posted instead. Marcelina is a very elegant young woman, and even though she is not one of my favorites and has never been on my list, it would be a pleasant surprise to see her as a semifinalist.

Australia: Renae Ayris down to earth, simple and has that surfer girl look. About her experience in Miss Universe she said that this is another phase in her life and career and the most important thing is not to win but to make sure that Australia has been very well represented. She's definitely not Jecinta Campbell (Miss Australia 2011) but she's always held her own. I've always had her on my list and she could pull the biggest surprise in the competition.

USA:  Olivia Culpo is without doubt beautiful and possesses that Hollywood star quality that very few girls have in the competition. Olivia certainly knows how to get attention and her bearing is very similar to that of a movie or television star without an air of arrogance. The last time USA won Miss Universe was back in 1997, and despite Olivia's short stature, her personality and presence is big enough for the coveted title.

Curacao: Monifa Jansen finally made it in the pageant after she won her national title two years ago. She's very happy that her dream came true. When asked about her journey to Las Vegas, she said, "Hector, you know very well what I've gone through to be here in Las Vegas. When I won Miss Universe Curacao, unfortunately I was underage by just a few days and was not eligible to compete in Miss Universe, and that made me really sad. However, it gave me the strength to prepare myself and to show that you can turn a negative situation into a positive one, and here I am representing my beautiful island of Curacao.  I want to be one of the semifinalists because I have worked so hard for this contest. I trained with all the necessary tools so my island will shine in Miss Universe and it's time that our country make the cut." Monifa stands out in this competition with her elegance and her prominent sense of fashion.

Guyana: There's no denying that Ruqayyah Boyer is a charming and sweet young woman. When asked about her fall during the preliminaries, she jokingly responded that she had done it on purpose. LOL. But she made a quick recovery for which she was applauded and gained instant fame. Perhaps if she hadn't fallen, then no one would have paid any attention to her.

Argentina: Camila Solorzano is a very sexy and sensual young woman. She expresses herself very well and said that she is living a dream come true: "Miss Universe for me is something so great, so divine that I swear I'm living a dream'"

Belgium: Laura Beyne is a shy girl who is especially proud of the roots of her mother, who is from Congo. When asked how she felt about the mixed Belgian-Congo blood, she replied it's what makes her different, unique and that she will always be proud of the African roots in her blood.

France: As we all know, Marie Payet, was appointed by the Miss France organization for this year's Miss
Universe. When asked if the appointment placed her in an advantage or disadvantage, she replied that neither one nor the other, and as if she had the Miss France pageant herself. Either way, she still had to prepare hard and so she did. Marie has qualities that few girls in the pageant have: she is refined, educated and very intelligent.

Dominican Republic: Dulcita Lynn Luggi - as her first name suggests - is a sweet girl with an aura of an angel that few have. She is very polite and articulate and expresses herself very well. Last year Dulcita lived one of the most horrible moments of his life when she found her father dead and had to live that unpleasant experience. Her father, who was Italian, had died of cerebral hemorrhage.

Brazil: Gabriela Markus is a charming woman woman, very attentive to detail and is extremely pleasant to talk with. When I told her that we had been communicating via Instagram, she said she recognized me and that made her happy! Gabriela is definitely a strong candidate for the crown. She has it all - height, beauty,figure and intelligence. She speaks English and Portuguese. She's one of my favorites and my instinct tells me that Brazil will have a Miss Universe before a World Cup.

Chile: Ana Luisa Konig is natural, fresh, youthful and is always herself. She says what comes from the heart, Her experience has been mostly in modeling and she probably has never competed before in a pageant. But it was her destiny to win Miss Chile which brought her to Las Vegas.

Puerto Rico: Bodine Koehler received me as usual with a big hug and a kiss - Boricua style. Bodine's first words were to thank me for supporting her in Miss Universe. When asked who her greatest competitor is, Bodine replied, "The strongest competitor I have is myself. I don't focus on other girls, but I focus on my work, on my performance and I don't want to come across as arrogant but when you come to Miss Universe competition you have to be aware only of yourself. You cannot waste time being aware of the other candidates, if they did this or did that. I came here to compete and I came to win. But I have to tell you that all the girls get along really well. I can honestly say I get along great with everyone, we are a close-knit group and that can be seen throughout the competition. " When asked for about her performance at the preliminaries, she said, "I'll tell you one thing Hector Joaquin, I felt so relaxed, so calm that when I did my catwalk in a gown by Harry Robles and in my swimsuit,  I felt that was flying on stage and seeing the faces not only of Puerto Ricans, but other people from other countries - that made me calm and satisfied - although for the final night you will see a more sensuaal Bodine - the kind that I am used to."

Bodine is the first woman not born in Puerto Rico who became Miss Universe Puerto Rico. She  was born in the Netherlands, of Dominican mother and Dutch father. When she was 10, she and her parents moved to Puerto Rico where they settled. Bodine began a successful modeling career, becoming one of the best models in Puerto Rico. I don't want to sound nationalistic, but Bodine can easily take the crown of Miss Universe. She has the complete package: body, height, regal bearing, great catwalk. Besides being of multicultural background, she  is also warm and classy and she could win sixth Miss Universe crown for the Isle of Enchantment! Go Bo!

Lebanon: As soon as I met Rina Chibany, I asked her about her stunning green gown that she wore during the preliminaries and she said that it was designed by Elie Saab. Her official photo was done by Azzaro. We can't deny that Rina is one of the best-dressed contestants this year. Most of her wardrobe are by top-notch designers. 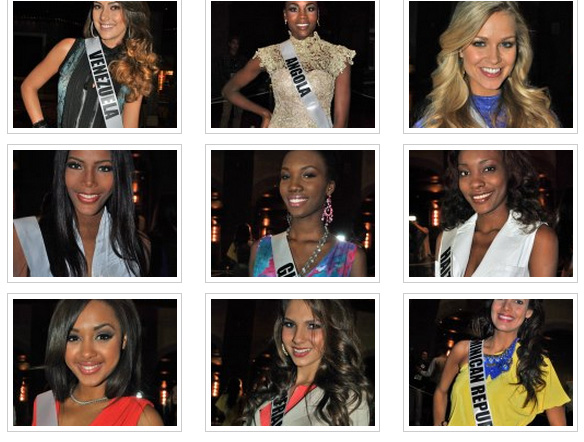