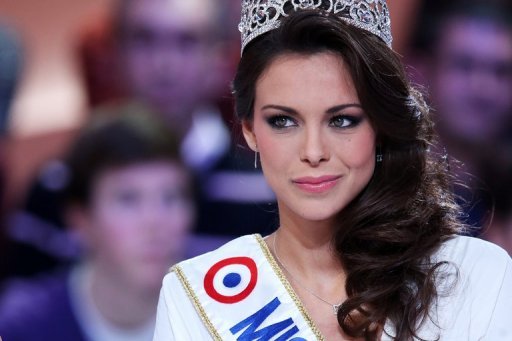 PARIS — A black rights group on Monday slammed the latest Miss France competition for producing a "white as snow" winner from a field it claimed was unrepresentative of the country's ethnic make-up.
Marine Lorphelin (photo), 19, a brunette medical student from Burgundy, was on Saturday crowned Miss France 2013, having edged out Miss Tahiti, Hinarini de Longeaux, in the final round of judging.
Louis-Georges Tin, the president of the CRAN (Representative Council of Black Associations), on Monday lamented the lack of contestants from France's African and north African communities.
"The failure to represent the contemporary French population in an event such as this is obviously serious," Tin said in a statement issued jointly with Fred Royer, the creator of Miss Black France.
"It amounts to denying the very existence of French people of African origin."
Of the 33 finalists in Saturday's contest, eight were from ethnic minorities with six of those coming from France's Pacific or Caribbean territories.
"In the antiquated world of Miss France, blacks apparently can only come from overseas departments," the CRAN statement said.
"As for Frenchwomen of north African heritage, they were 'represented' by only one candidate who was quickly eliminated (too Muslim perhaps?)."
France is home to around five million Muslims, most of them of north African origin.
The statement went on to express regret that "Miss France is as white as the end of year snow on the steeples of an eternal France."