Sushmita Sen, the first Miss Universe from India and director of I AM SHE Pageant that selects India's representative to Miss Universe and minor global pageants,  announced today that she has terminated her ownership of the Miss Universe franchise after three years. Below is the message she had posted on the official I AM SHE website: 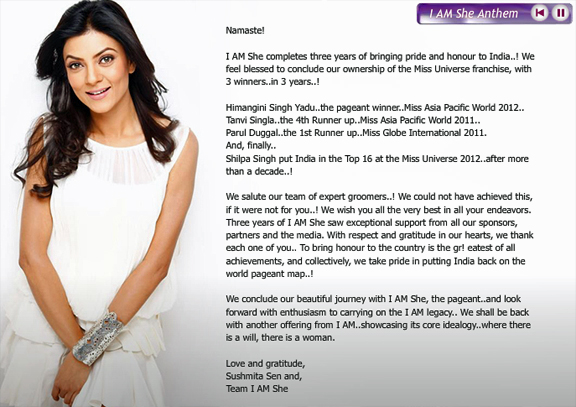 Speculations are brewing that Femina Miss India - which held the Miss Universe franchise for decades - may be interested in reclaiming it. Under Femina Miss India, the country has produced two Miss Universe winners (besides Sushmita who won in 1994, Lara Dutta won in 2000), fourMiss Worlds (Aishwarya Rai in 1994, Diana Hayden in 1997, Yukta Mookhey in 1999, Priyanka Chopra in 2000, and one Miss Asia Pacific (Diya Mirza in 2000). Under Sushmita's helm, India has had below average success in global pageantry. Himangini Singh Yadu's victory in Miss Asia Pacific World 2012 is a farce, since the Korean organizers of the pageant had infringed on the copyright of the traditional "Miss Asia Pacific International" pageant originally organized by Filipinos.

Anyway, despite Sushmita's naiveté and less than stellar performance as a national director, we still admire her for her tenacity and her noble attempts to elevate Indian beauties in world stage.