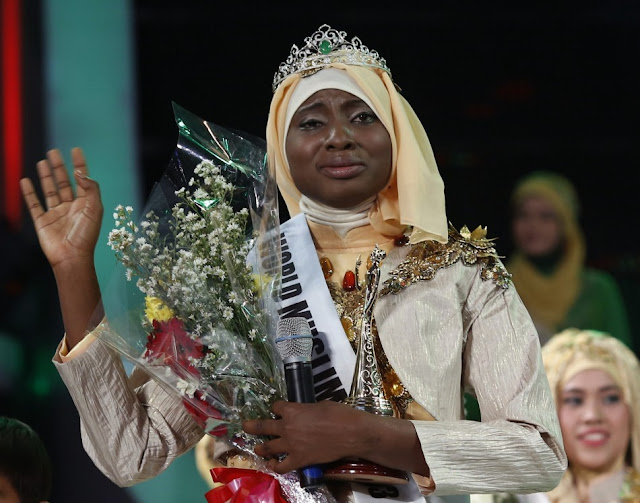 
A Nigerian woman tearfully prayed and recited Koranic verses as she won a beauty pageant exclusively for Muslim women in the Indonesian capital Wednesday, a riposte to the Miss World contest that has sparked hardline anger.
The 20 finalists, who were all required to wear headscarves, put on a glittering show for the final of Muslimah World, strolling up and down a catwalk in elaborately embroidered dresses and stilettos.

But the contestants from six countries were covered from head to foot, and as well as beauty they were judged on how well they recited Koranic verses and their views on Islam in the modern world.
After a show in front of an audience of mainly religious scholars and devout Muslims, a panel of judges picked Obabiyi Aishah Ajibola from Nigeria as the winner.
While the event in a Jakarta shopping mall paled in comparison to Miss World on the resort island of Bali, in which scores of contestants are competing, Ajibola was nevertheless overwhelmed.
Upon hearing her name, the 21-year-old knelt down and prayed, then wept as she recited a Koranic verse.
She said it was “thanks to almighty Allah” that she had won the contest. She received 25 million rupiah ($2,200) and trips to Mecca and India as prizes.
Ajibola told AFP before the final that the event “was not really about competition”.
“We’re just trying to show the world that Islam is beautiful,” she said.
Organisers said the pageant challenged the idea of beauty put forward by the British-run Miss World pageant, and also showed that opposition to the event could be expressed non-violently.
Eka Shanti, who founded the pageant three years ago after losing her job as a TV news anchor for refusing to remove her headscarf, bills the contest as “Islam’s answer to Miss World”.
“This year we deliberately held our event just before the Miss World final to show that there are alternative role models for Muslim women,” she told AFP.
“But it’s about more than Miss World. Muslim women are increasingly working in the entertainment industry in a sexually explicit way, and they become role models, which is a concern.”
Hosted by Dewi Sandra, an Indonesian actress and pop star who recently hung up her racy dresses for a headscarf, the pageant featured both Muslim and pop music performances, including one about modesty, a trait the judges sought in the winner.
The pageant, which also featured bright Indonesian Islamic designer wear, is a starkly different way of protesting Miss World than the approach taken by Islamic radicals.
Snowballing protest movement
Thousands have taken to the streets in Indonesia in recent weeks to protest Miss World, denouncing the contest as “pornography” and burning effigies of the organisers.
Despite a pledge by Miss World organisers to drop the famous bikini round, radical anger was not appeased and the protest movement snowballed.
The government eventually bowed to pressure and ordered the whole pageant be moved to the Hindu-majority island of Bali, where it opened on September 8.
Later rounds and the September 28 final were to be held in and around Jakarta, where there is considerable hardline influence.
But there are still fears that extremists may target the event — the US, British and Australian embassies in Jakarta have warned their nationals in recent days of the potential for radical attacks.
More than 500 contestants competed in online rounds to get to the Muslimah World final in Indonesia, one of which involved the contenders comparing stories of how they came to wear the headscarf.
The contest was first held in 2011 under a different name and was only open to Indonesians, Shanti said, but after the media began comparing it to Miss World, it was rebranded as a Muslim alternative to the world-famous pageant.
Because of its popularity, organisers accepted foreign contestants this year for the first time, with Iran, Malaysia, Bangladesh, Brunei, Nigeria and Indonesia represented.