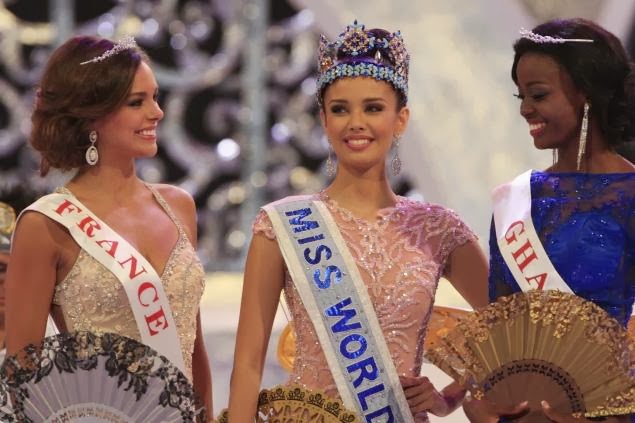 For the first time in the 63-year-long history of the Miss World pageant, the Philippines - a pageant-crazy nation - won the coveted crown in Bali, Indonesia on Saturday evening, September 28. Megan Young, a 23-year-old aspiring filmmaker born in the United States, was crowned by outgoing titleholder Wenxia Yu of China at Bali Nusa Dua Convention Center. Young's court includes 1st runner-up Marine Lorphelin of France and 2nd runner-up Naa Okailey Shooter Ghana. The remaining three finalists were Sancler Frantz of Brazil, Elena Ibarbia of Spain, and Maroua Kharbouch of Gibraltar who had won the People's Champion Award (via public online voting).

All top 6 finalists were asked the same question, "Why should you be the next Miss World?" This was Megan Young's response: “The Miss World for me treasures the core values of humanity and a guide to understanding people, why they act the way that they do, the way they live their lives, and I will use these core values and my understanding – not only by helping others but to show other people how they can understand others, so that as one, together, we shall help society. Thank you.”

"I promise to be the best Miss World ever," Young, 23, said after winning the crown, as a large number of Filipino fans who traveled to Bali celebrated by jumping and waving the country's flag. Young was born in the United States and moved to the Philippines at age 10, according to her biography. The new Miss World is a college student who has appeared on screen as an actress and presenter since she was 15. Young wants to move behind the camera and become a director, according to her bio. Despite threats from the Islamic Defenders Front to disrupt the contest, police said no rallies were staged Saturday and the show proceeded smoothly in front of a sell-out audience.

Miss World's 127 contestants competed in beach fashion, fitness, world fashion, talent and "Beauty with a Purpose" meant to honor charitable work. The top 10 models - from Ukraine, South Sudan, Brazil, the Philippines, France, Cameroon, Cyprus, England, Italy and the United States - were announced earlier this week. During the coronation party, the continental queens were handed out to the following: Megan Young of the Philippines (Queen of Asia), Marine Lorphelin of France (Queen of Europe), Erin Victoria Holland of Australia (Queen of Oceania), Sancler Frantz of Brazil (Queen of the Americas), Gina Hargitay of Jamaica (Queen of the Caribbean) and Naa Okailey Shooter of Ghana (Queen of Africa).

I saw the live telecast from E! Channel that started at 8:00 AM Boston time. The telecast was crispy clear and on the dot, compared to a few seconds' delay of the live streaming from various sites. I was really impressed by the opening number featuring Indonesian artists performing indigenous dances. And of course, my favorite segment - "Dances Of The World" - featuring selected contestants performing their respective national dances. I have never seen such a colorful, vibrant and grandiose production in any pageant show, and this is what pageantry is all about - theatricality. The production was not entirely perfect; there were several glitches, both audio and visual, which spoiled the live transmission, such as in the case of Miss Bolivia whose face was never seen during the introduction. Then Miss Ghana whose name had to be called three times before realizing that she had been voted in the top 10. When it was time for Miss Philippines's video to be shown, it was Miss Poland's face that appeared on the screen; it took the technical crew a good 15 seconds to retrieve Miss Philippines's video. The Indonesian co-hosts were just awful; they were either talking too fast in English - sometimes unintelligible - or were simply trying too hard to sound like professional emcees. At one point, the audio faded for a few seconds while Kamal Ibrahim was talking; luckily, he realized the glitch and repeated what he was saying.

There was also a handful of precious moments - which you will rarely see in a Miss Universe telecast, by the way. Moments such as the sweet introduction of Denise Perrier, who looks regal and still beautiful 60 years after she was crowned Miss World in 1953; the touching video on Miss Nepal's work with underprivileged children in her country (she eventually won the Beauty With A Purpose award); and Kamal interviewing Megan's mother in the audience: when asked what the biggest piece of advice she gave to Megan before she came to the pageant, she replied, "Be Kind. You can never go wrong with kindness." Awwwww...

But the most precious moment of all was when the Filipino fans in the audience erupted in joy as their country won its first ever Miss World crown since the Philippines first competed in 1966. Megan's victory sealed the Philippines's reputation as the leading pageant powerhouse in Asia, and as long as the Filipino fans continue to support their beauty queens with the same level of support they have showered Megan, it is very likely that the Philippines will win its second Miss Tourism Queen International crown in October, its third Miss Universe crown in November, its fifth Miss International crown and its second Miss Earth crown in December! Mabuhay, Philippines! 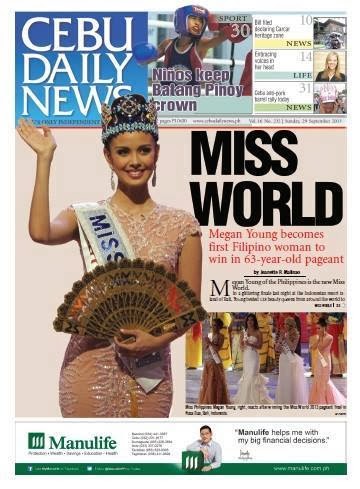