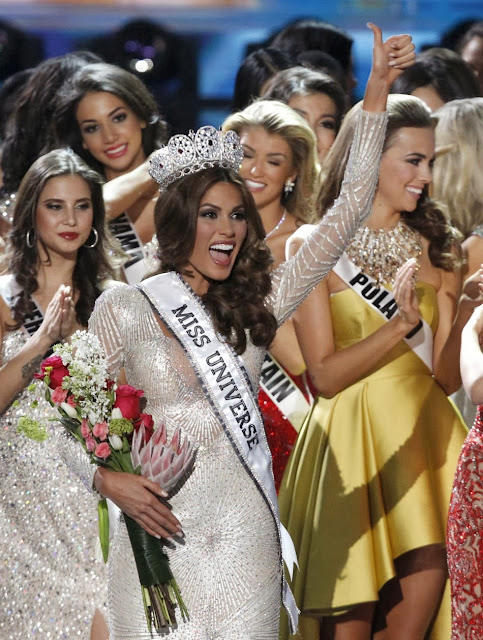 Figuring in the top 10 were Yaritza Reyes of the Dominican Republic, Amy Willerton of Great Britain, Manasi Moghe of India, Olga Storozhenko of the Ukraine, and Erin Brady of the USA.

Rounding up the top 16 were Jin Ye of China, Fabiana Granados of Costa Rica, Whulandary Herman of Indonesia, Nastassja Bolivar of Nicaragua, Monic Perez of Puerto Rico, and Dominique Rinderknecht of Switzerland.

The show was co-hosted by NBC anchorperson and journalist Thomas Roberts and entertainer Mel B (formerly of the Spice Girls). Entertainment was provided by Azerbaijani singer Emin Agalarov, the pop group Panic! At The Disco, and Aerosmith lead singer Steven Tyler, who also served as a judge.

***Note: the Miss Photogenic Universe award was won by Poland's Paulina Krupinska and the Miss Congeniality Universe went to China's Jin Ye. However, the awards were not distributed during the telecast to give way to Steven Tyler's performance.

For the first time since 1973, the pageant was not shown live on American soil, which distressed many pageant fans on the Eastern seaboard of the United States who are used to watching the telecast live. The live telecast from Moscow started promptly at 10 PM Moscow time, which would have been 1:00 PM on the U.S. East Coast. To those who did not want to wait for the delayed telecast on NBC at 9:00 PM, they could view the live stream from various independent sites.

I happen to be one of those people who couldn't wait for 9 hours for the delayed telecast, so I opted to view the live stream from a Spanish-language TV station. The transmission was rather decent except for the annoying ads, but about 15 minutes towards the end of the show, the connection started to act up and my Internet froze. CB correspondent Hector Joaquin would later explain that the Internet connection at the Crocus City Hall Media Center had been mysteriously severed as soon as the five finalists were announced.


My favorite for the crown was Olga Storozhenko of the Ukraine (photo, below). This woman could do no wrong. I had never seen any unflattering pictures of her from the moment she arrived in Moscow until the finals. Her Hollywood goddess face, her regal and polished bearing, her sultry voice, her perfectly well-toned soft body - I was really hoping that the Ukraine would have its first Miss Universe crown after having sent so many strong and beautiful girls in previous years. But the more I analyzed her images and videos - and her performance in the preliminaries - it dawned on me that she would be just too perfect or "aristocratic" to be Miss Universe. I couldn't imagine her "getting down and dirty" or being surrounded by underprivileged children or sick people. Some fans perceived her as icy cold, with which I disagree, especially after having seen her quirky side in the video interview. 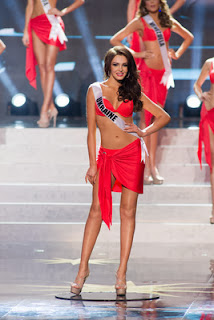 Back to the top five assessment. Miss Brazil Jakelyne Oliveira made the cut because she had the best swimsuit body (she's your typical tanned, sexy Brazilian beach garota) but I found her face a little odd (maybe it's her pug nose). Miss Ecuador Constanza Baez was off my radar until she wowed me in the swimsuit competition, but she's a regular butterface and her mint-colored frilly gown didn't do justice to her fabulous figure. She would also fix her hair once in a while, which annoyed me. Miss Philippines Ariella Arida  - who won the 16th semifinal stop via online voting - had the most beautiful hair, so silky and bouncy, but her bright sunny yellow strapless gown was more appropriate for a high school prom (although the color perfectly suited her dusky complexion). Her facial expressions were also bland. Miss Venezuela Gabriela Isler gave a strong and consistent performance throughout the entire competition; she was not in my top five list (Spain, Ukraine, Great Britain, USA, Dominican Republic), but she's Miss Venezuela, and that's good enough for the judges to crown her in her iridescent silver gown. Like all past Venezuelan representatives, Gabriela emitted an effervescent personality and remarkable stage projection. Though compared to her predecessor, Gabriela's beauty is ordinary. It's easy to get tired of looking at her. 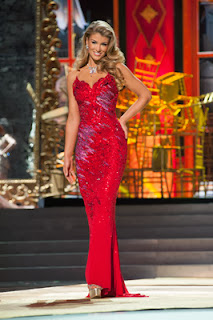 Other delegates that made an impression on me included Amy Willerton of Great Britain (photo, left). If there is one contestant who epitomized the old Hollywood glamour à la Veronica Lake, it would be Amy. Her top 10 placement is the best one that her country (Great Britain/United Kingdom/England) has ever had since Karen Lesley Moore placed 4th runner-up in 1983 (exactly 30 years ago!). All that hair-tossing, that sexy-strutting and stunning Jessica-Rabbitesque glitzy red dress paid off for this hot Brit. Then we have Miss China Jin Ye, whose slick hairdo and top model strut in swimsuit made her stand out from the rest. Initially, I was underwhelmed by Miss Dominican Republic Yaritza Reyes's performance during the prelims, but she blew me away with her outstanding performance in both swimsuit and evening gown segments of the finals. Remember, this was the same girl who fell into a hole on stage during the Yamamay fashion show two weeks ago; she quickly recovered and brilliantly finished her routine as if nothing had happened.


They say that the Q & A segment determines the results. They say that your answer can either make you or break you. That may be true, but not in this year's competition. Four of the finalists (Ecuador, Brazil, Spain, Venezuela) relied on an interpreter. Here's the full transcript:

Question for Ecuador from judge Philip Kirkorov : What would happen to the world if we could no longer use the internet?
Ecuador: I believe that computers themselves as one of the technologies nowadays. It has its advantages and disadvantages and one of the disadvantages is that we are no longer as close together with our families. I would like to use this moment to tell the teenagers and everybody that we should use the methodology of computers and the Internet in a positive way. It is never too late to start. Let us start right now.
Question for Brazil from judge Carol Alt: What is your opinion in places that do not allow women to vote, travel abroad, or drive cars?
Brazil: Good evening everybody! In my opinion, we as women achieved our independence through time. Unfortunately, nowadays we still have some problems with our independence as women. But we need to keep our open minds because nowadays we are homemakers, we are out there in the work force. In my country, we have a female president. We are capable of everything.
Question for Spain from judge Anne Vyalitsyna: What is the most significant thing we can do to help elect more women to political offices around the world?
Spain: I believe in order to select a good woman, she must possess good qualities in order to perform a good job – discipline, knows how to adapt herself, how to respond with her work, her performance and fulfilling her job.
Question for Philippines from judge Tara Lipinski: What can be done about the lack of jobs for young people starting their careers around the world?
Philippines: For the people who have lack of jobs, I do believe that we people should invest in education and that is my primary advocacy, because we all know that if everyone of us is educated and well aware of what we are doing, we could land into jobs and we could land a good career in the future. So education is the primary source and a ticket for a better future.
Question for Venezuela from judge Steven Tyler: What is your biggest fear and how do you plan to overcome it?
Venezuela: I believe that one may have a lot of fears but nonetheless this is not something negative. I believe we should overcome all our fears and this in turn would make us much stronger. As soon as we overcome our fears and we're sure of ourselves, we can face any challenge.

Even though no one stammered or choked, none of the finalists really answered their respective question. Their answers were either safe or general and sometimes poorly delivered, especially that of Spain's. It is this kind of answers that makes potential pageant contestants spend lesser and lesser time practicing with their interviews - falsely assuming that they can still place and win with a safe answer. Did anyone notice that there were only five questions in the bowl? And did anyone notice, too, that the five judges who had been chosen to ask the questions were all highly prominent celebrities? And most importantly, why was the number of judges an even number (8)? What would have happened if there had been a tie, and who would have been obliged to break the tie? Trump himself? Considering that Miss Philippines was the only one to answer in English, this justifies the controversial statement that she expressed during a TV interview in which she had commented that "Latinas can't even speak a sentence in English" - which, by the way, was taken out of context. Expect Latinas to rely on interpreters next year, and the following year... infinity.

To those of you who did not see the live stream on the Internet, you missed the part when Gabriela did not realize that she had actually won. Even Miss Spain was confused. Watch:

NBC edited the delayed telecast by cutting out the "confusing" episode. I really wish they stop announcing the winner first before the 1st runner-up. This avoids confusion, especially between the last two girls standing whose native language is not English. Poor Miss Spain was not given a proper "whisk" (usually the whisker would let her pose for the cameras for a few seconds before being pulled completely aside). Everything felt too rushed.  There had been many occasions when the last two girls were from countries that did not speak English and there had never been any confusion. Why? Because they stuck to the pattern of announcing the 1st runner-up first before the winner. You don't need a translator. All the hosts have to do was to announce the name of the country. Perhaps if the hosts had positioned themselves closer to the two girls, then the girls wouldn't have been too confused. I miss former hosts Bob Barber and Bob Goen calling the 1st runner-up first and even pointing at the winner to avoid confusion. Gabriela's crowning moment was messed up by poor stage direction and by the fact that her crown slipped off her head three times.


I have to say that the stage is probably the most majestic stage that I have ever seen. And this beautiful picture featuring a replica of the Kremlin is what I'd like for the pageant in Moscow to be remembered for, and not the ugly politics behind it or these eerie Matryoshka dolls (Russian nesting dolls): 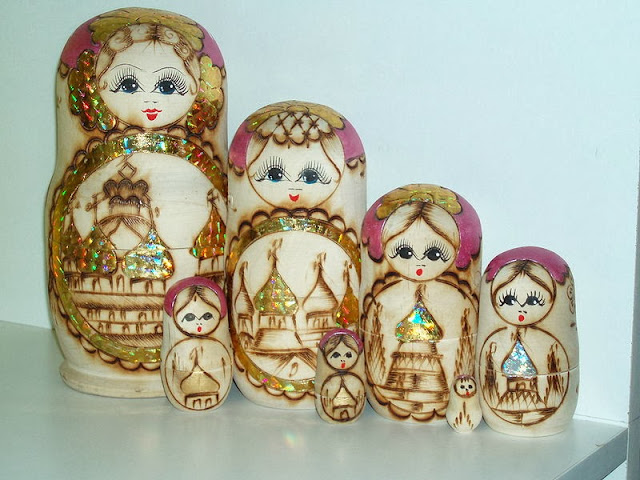