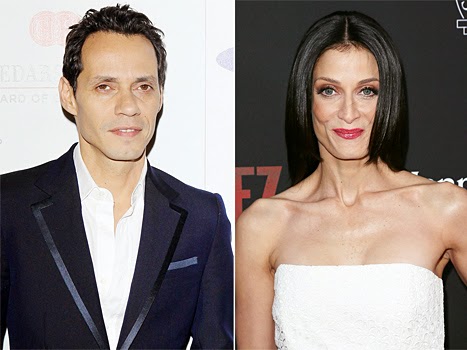 Case closed. Marc Anthony has settled an ongoing court battle this week with his ex-wife Dayanara Torres regarding child support. Us Weekly has confirmed that a judge ordered Anthony to pay $26,800 per month in child support for his two kids with Torres, sons Christian and Ryan.
Anthony, 45, was previously paying $13,400 a month. Torres requested that amount be raised to $123,426 a month in November 2013, citing lifestyle changes, in addition to child support needs. Part of the ten-fold child support increase included the need for a nanny and housekeeper, which would cost Torres up to $7,000 a month.
Us obtained the court documents detailing the exact amounts Anthony has been ordered to pay. Anthony's legal team offered $28,000 per month -- the judge ordered $26,800. According to the documents, his team also offered $30,000 per year for travel -- the judge ordered $12,000.
The documents also revealed that the original judgment required Anthony to pay support until the kids were 21 plus college education. The judge terminated support when the kids turn 18 per California law.
The Latin sensation and former Miss Universe, 39, were married from 2000 to 2004. One week after their divorce was finalized, Anthony married Jennifer Lopez; the two announced they were separating in July 2011. (Anthony filed for divorce in 2012, but the parents to 6-year-old twins Emme and Max have yet to finalize their split.)
Anthony is currently linked to Topshop heiress Chloe Green, while Lopez most recently datedCasper Smart for two years. A source close to the "Dance Again" singer confirmed to Us last Friday, June 6, that the two are no longer together.