Although I personally believe it would be negligent and unethical to have repeated abortions while continuing not to use birth control, I stand firm in my opinion that abortion should be a woman’s personal choice. I think every woman should have the opportunity to make the proper life choices for themselves and their bodies. Lena Dunham said it best, “A huge part of being a feminist is giving other women freedom to make choices you might not necessarily make yourself.”

Yes, I do think “age appropriate” Sex and Relationship Education should be taught in elementary schools. No child is too young to learn about having respect for others, as well as the characteristics of healthy relationships; including a zero tolerance policy against violence and abuse. It’s important to understand that “age appropriate” sexual education focuses on teaching children about their bodies, and preparing young girls and boys for the ways their bodies will change when puberty hits. From that foundation the understanding of sex and other issues can develop in middle school and high school. I believe Sexuality Education should be one of many ‘life skills’ topics taught in schools; including basic financial advice and emergency first aid.

My goals for the next five years are to become a business women and independent filmmaker. I plan to make an impact on the film industry by putting females in the forefront, not sidelined or highly sexualized. Eventually I plan to build a brand that will encompass my goals in cinema and philanthropic work. Pageantry has given me the platform to reach a broader audience. 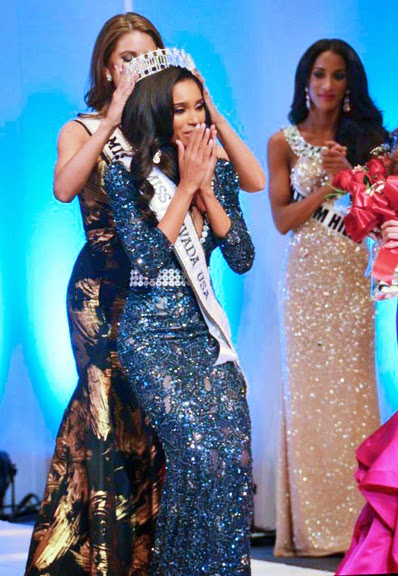 If I won Miss USA I would feel let down if one of my fellow titleholders told me that I didn’t deserve the crown. However, I believe everybody is entitled to their own opinion, and unfortunately you can’t control the way other people perceive you. Knowing that, I would shake it off and move on!

I think physical appearance is important because we are expected to make frequent on-the-spot ‘judgments’ about people based on their physical appearance daily. Although we know “appearances can be deceptive,” they have a huge influence on our first impressions, our job interviews, and our daily interactions. Though physical appearance can be influential, having the ability to show people who you really are sets you apart and makes you stand out. I don’t know about you, but I’m most drawn to people who reflect internal characteristics of beauty. Qualities such as grace, humility, and a good sense of humor always beats out physical appearance on it’s own.

DO YOU THINK THAT OUR CULTURE IS TOO PREOCCUPIED WITH BEAUTY? HOW COULD WE CHANGE THAT?
I believe we as a culture have grown accustomed to extremely rigid and uniform standards of beauty as a consequence of the media. The reason our culture is so preoccupied by beauty is because television, billboards, magazines, and even social media have presented women with standards of beauty that are almost unattainable. The way to shift our focus is to champion woman for more than just their beauty. The media needs to help expand the public’s opinion of  beauty by showcasing a variety of diverse women, and establishing new beauty 'values' linked to inner traits like intelligence and strength. After all, I don’t think it’s the goal of attaining beauty that we as a society find valuable, I think it’s the attention that comes along with it that we find desirable.

If I could be another woman for a week I would choose to be Ava Duvernay. Ava Duvernay is female American filmmaker that I admire greatly. She was the first African American woman to be nominated for a Golden Globe for Best Director for the film, "Selma." Like Duvernay, my career goal is to become a successful independent filmmaker and eventually transition into big budget cinema. I would love the opportunity to learn from the experiences of being a powerful female director in Hollywood today.

HAVE YOU EVER HAD COSMETIC SURGERY OR ANY OTHER ALTERATION TO YOUR APPEARANCE?
No, I have never had any cosmetic surgery, or made any other alteration to my appearance. Although I haven’t had plastic surgery, I certainly am not against it. I think everyone should have the right to decide what’s right, and what isn’t right for their own bodies.

WHY DO YOU FEEL THERE IS SO MUCH ANTI-AMERICAN SENTIMENT AROUND THE WORLD TODAY?
I think anti-American sentiment exists today because of the conflicting views the world has on American policies; specifically attitudes towards security and military issues. There has been major opposition against recent U.S. drone attacks, anger towards Washington over the U.S. spying on foreign leaders, and controversy about what to do in the Middle East. I think these issues, as well as other problematic topics all add to the anti- American sentiment found around the world.

I think the greatest challenge facing America today is the growing divide between the two major political parties in our country. Democrats and Republicans are not only unable to agree, but increasingly seem unable to imagine, or even understand the other party’s point of view. I believe it’s our unwillingness to compromise that is stopping our country from making true progress, and progressively causing deep divisions among us. I believe both parties offer valuable points of view; we need to stop fighting and work towards finding middle ground.

I am most proud of the Freedom of Speech, one of the fundamental values expressed in the United Sates Constitution, under the First Amendment. We are so lucky to live in a country that allows us to express ourselves without the interference of the government. I believe ALL of our civil liberties encompass the spirit of what it means to be an American. No other country has gone to such great lengths to protect the interest of each individual and promote personal empowerment.

WHAT SHOULD WE DO WITH OLDER PEOPLE WHO ARE SUFFERING FROM ALZHEIMER'S AND OTHER LIFE-THREATENING DISEASES WHERE THEY CAN'T TAKE CARE OF THEMSELVES?

A few months ago I watched a CNN special by Dr. Sanjay Gupta about a breakthrough medical village called, “Hogewey,” also known as “Dementia Village” in the Netherlands. It was quite extraordinary. Two Dutch nurses decided to build a village for people with dementia complete with beauty salons, grocery stores, motion sensor elevators, and 24 hr security; all ran by specialized health workers living in the community. Now, I’m not suggesting we create different villages for people suffering from life-threatening conditions. However, the idea of creating an environment where people enduring severe illnesses, like Alzheimer’s disease, can live out the rest of their lives feeling both safe and happy was inspiring to me. I think we should offer facilities with fundamental similarities to places like, “Hogewey” here in America. We need to focus on making efforts towards helping people with life-threatening illnesses feel safe, cared for, and happy; so they too can live out the rest of their lives peacefully. 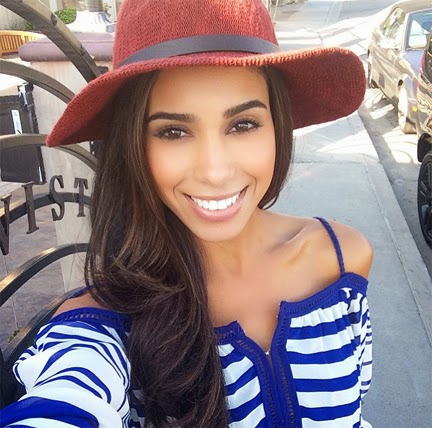 I think the U.S. government needs to take the threat of ISIS extremely seriously. The Islamic extremist group is responsible for killing innocent, unarmed civilians around the world, and is continuing to grow stronger. Their brazen efforts for recruitment are working; targeting children, specifically young minority girls, into the terrorist group through social media. I was shocked to find out that there were over one thousand westerners that were believed to have traveled to Syria to fight with extremist groups. We need to start taking the threat of ISIS more seriously before they grow into a group that we cannot contain.

I don’t think it is fair to group all Muslims with the Muslim extremist who were responsible for the September 11, terrorist attacks. I think a person’s opinion on whether Islam is a “religion of peace,” or not depends on their perspective. There are extremists in every religion who use their faith to justify acts of violence, tyranny, and terrorism. However, I don’t think it’s fair to characterize all followers of Islam as violent.

SOME STATES STILL PRACTICE THE DEATH PENALTY AS PUNISHMENT FOR HORRENDOUS CRIMES? DO YOU THINK THAT IT SHOULD BE ABOLISHED? WHY OR WHY NOT?

To be completely honest I am undecided on whether I think the death penalty should be abolished or not. In the past I was in support of capital punishment believing that people responsible for heinous crimes, such as rape, torture, treason, kidnapping, or murder should be punishable by death. However, after hearing the Bostonians' opinion against the death penalty for Dzhokhar Tsarnaev, the Boston Marathon Bomber,  I have begun to question whether it’s the government’s right to take another human’s life.

WHAT IS YOUR DEFINITION OF AN ETHICAL PERSON?
I think the definition of an ethical person is someone who lives by a set of moral principles that reflects the basic human standards of what’s right and what’s wrong. I don’t think you have to be religious to be ethical. I think an ethical person is someone who has respect for themselves, the people around them, and acts accordingly.

The goal of winning Miss USA is only one of my dreams. I want the Miss USA pageant, whether I win or lose, to be the stepping stone towards my overall career goals in the entertainment industry. As women we do have more options than ever to advance our personal and professional lives. The title of Miss USA would only be the start of my story. 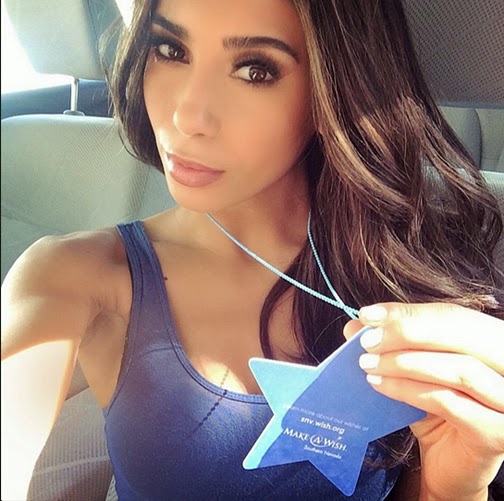 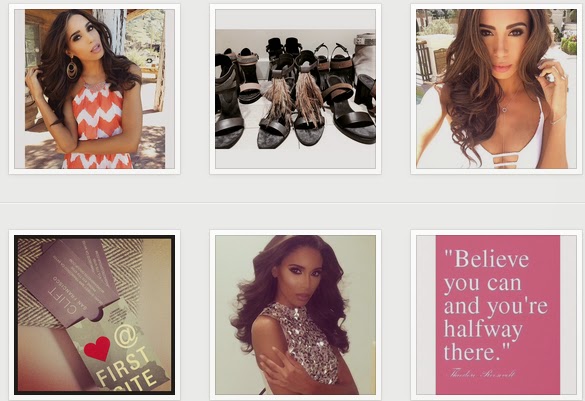 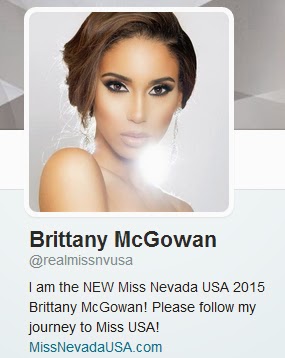 Thank you, Brittany, for granting us this interview
and we wish you the best of luck in Miss USA 2015!