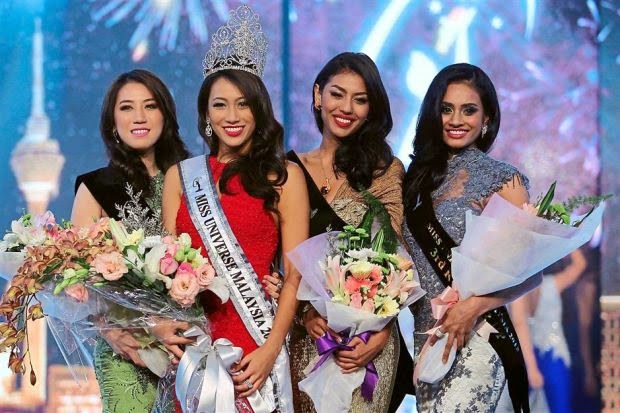 KUALA LUMPUR: After a month of intense training, stiff competition and televised challenges, 24-year-old Vanessa Tevi Kumares was crowned Miss Universe Malaysia 2015.
The tourism management graduate of Indian-Chinese parentage from Seremban shed tears of joy, which quickly dried up as she received the crown and sash from her predecessor, Miss Universe Malaysia 2014 Sabrina Beneett, just after midnight.
Vanessa beat 16 other hopefuls to the crown, and is expected to do the country proud when she takes on the rest of the world early next year.
Following her graduation from Britain, she interned for a year in the United States, and recently started work at a hotel in Singapore.
A former synchronised swimmer in school, Vanessa is a thrill-seeker who enjoys activities like bungee jumping, skydiving, hiking and jumping off cliffs.
“As a normal girl, I was thrust into this world of glitz and glamour that I was not used to, and I would like to thank the organisers for this opportunity and for training me for this very moment,” she told The Star after her crowning.
Along with the title, she took home RM50,000 in cash as well as gifts from sponsors worth more than RM180,000.
“The team worked harder this year to prepare all 17 finalists for the competition, and I am proud to say that every one of them has transformed tremendously,” said Miss Universe Malaysia Organisation national director Carey Ng.
The crowning took place at the grand ballroom of the Shangri-La Hotel here last night that also saw Pauline Tan, 24, Kelly Jagan, 26, and Sugeeta Chandran, 26, walking away as first, second and third runners up respectively.
In addition to the dazzling display of exquisite evening gowns and stylish swimwear, the gala night also featured performances by entertainers that included Ning Baizura.
Miss Universe Malaysia is the longest running pageant in Malaysia, and has produced personalities such as Datin Josephine Fonseka, Yasmin Yusoff, Datuk Anna Lim, Elaine Daly, Andrea Fonseka, Nadine Ann Thomas, Deborah Henry, Kimberley Leggett and Ng.