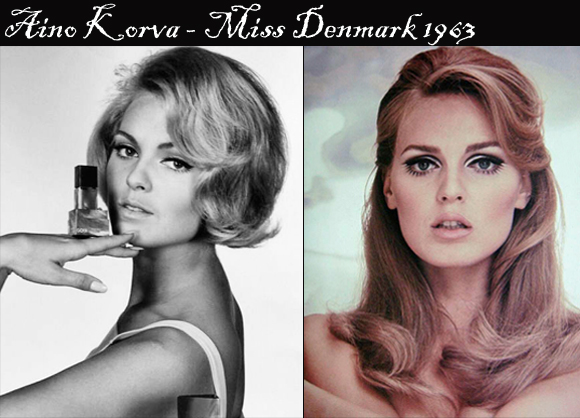 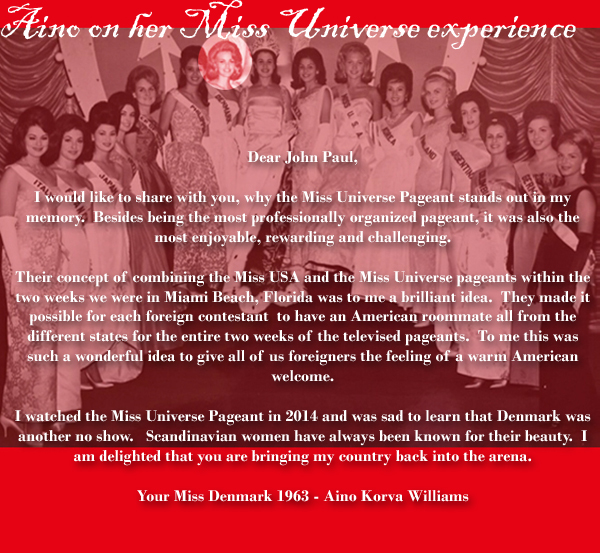 AT AGE TWENTY, I thought I had my life pretty well-established.  I had completed my education as a bilingual executive secretary and was working for a reputable pharmaceutical company in Copenhagen.

It was by pure coincidence that I became a candidate for the Miss Denmark title as someone else submitted my photo for the contest, which was sponsored by a popular weekly women’s magazine.

My life, as I thought it was going to be, began to change the day I entered the competition. To my own surprise I was chosen to represent my country as Miss Denmark 1963.  In order to fulfill my responsibilities of my new title, I took a one-year absence from my job, as I realized I was expected to participate in several additional contests on an international level.  Included was the most prestigious of all of them, the Miss Universe Pageant in America.

The adventure brought  exciting new dimensions to my down-to-earth life.  Being chosen as a representative of my country brought a great feeling of honor to my heart.  I was now an ambassador of Denmark.  I was on a journey to do my very best to maintain the goodwill of my native land and it became evident to me that this contained far more than a beauty title.  During my year of reign I visited 11 countries on 4 different continents.  Some of the pageants included visits to other countries and everywhere we were met with  overwhelming  hospitality.

IN LITTLE TOWNS as well as big cities we were welcomed by mayors and dignitaries at elaborate parties.  We stayed in the finest hotels and were chauffeured in limousines.  We saw all the sights and points of interest in the days prior to the rehearsals for the pageant and it was time for work.  I shall never forget the view of New York city from the top of the Empire State building (I had never seen a skyscraper before),   standing in the Coliseum in Rome,  visiting the ancient temples and ruins of Baalbek and Byblos in Lebanon,  riding a camel at the Giza Pyramids in Egypt,  taking the water taxi between Hong Kong and Kowloon,  and touring the alligator-filled Everglades of Florida.  We were showered with souvenirs and gifts of all kinds as well as cash prizes for the 5 finalists.

A summary of the beauty pageants that followed were:

The many travels and the international exposure the pageants provided gave me a sense of what life was like in the faster lane  -  and I liked it.  This sparked an ambition in me to somehow make this lane continue beyond my year as Miss Denmark.  It turned out to be easier than I ever imagined.

I never made it back to my safe plan.  Returning to my steady job did not happen.  Once at home in Gladsaxe again the phone was ringing off the wall with offers to appear in commercials (which were shown only in cinemas in those days), modeling in advertisements, fashion shows and a few appearances in Danish movies.  I owe a lot to the Guldbrandsen photography family for teaching me the techniques of studio shoots and for including me in their steady staff of models.  One very busy year later I felt myself established as a professional model and it was time for my next adventure.

I HAD FALLEN IN LOVE with America and the friendly and warm American people.  I wanted to live and work there, so I packed my bags and moved to sunny Los Angeles, California.  I made an appointment for an interview with the top Nina Blanchard modeling agency and she signed me up on the spot.  This was the beginning of a long prosperous and very successful modeling career working in TV commercials, fashion and print jobs. One of the many highlights of my career in the U.S. was living in New York City working for Eileen Ford, the world’s top modeling agency.  I held her in high esteem for her work ethics and setting a high bar for the modeling profession.

Thirteen years later it was time for a change and I made another drastic geographical move to a Greek island to raise a family and run a restaurant business.  I lived on the island for twenty years before I returned to my beloved America, where I entered a new career as a corporate flight attendant serving executives of a global company in addition to flying professional sports teams, The White House Press Core and the FBI SWAT team.

Now, that I am a lady of a certain age, I have settled in the beautiful Blue Grass state of Kentucky enjoying life in the slower lane, having time for my hobbies, such as photography, china painting and gardening. (Although I did pick up some senior modeling assignments and a few TV commercials).

Looking back at my international life, I learned to take chances and become fearless of change. With great fun and high aspirations I have hopped continents with car, furniture, pots and pans as others take the bus! 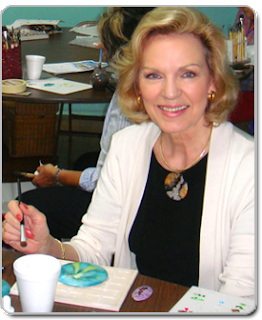 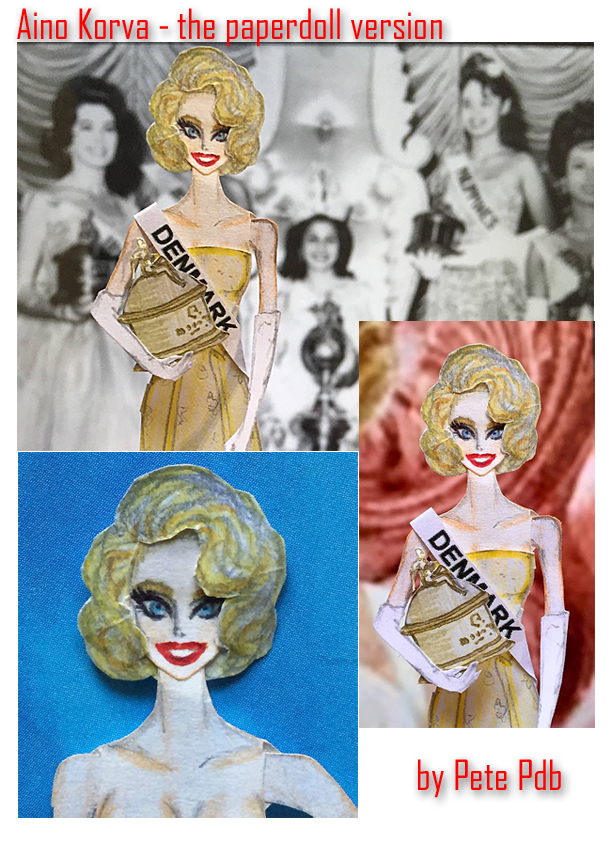