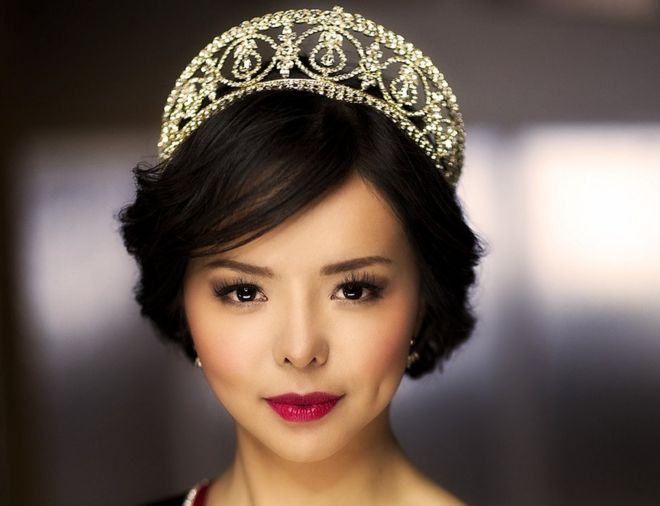 Anastasia Lin, the winner of Miss World Canada, says that she has been denied the right to compete in this year's Miss World competition because she has spoken out about Chinese human rights abuses.
The 25-year-old Chinese-born actress did not receive an invitation letter from the Chinese government that would allow her to take part in the Miss World competition this December in Sanya, China.
Without the letter Lin is unable to apply for a visa, and because the opening ceremony is on 23 November, the opportunity to compete is fading fast. The deadline to receive the letter came and went on Friday.
"Miss World's official line is that if I don't make it to the opening ceremony, I probably can't enter this year. If I'm a few days late it might be OK, but the window is closing. At this point I don't want to give up," Lin told the BBC.
Other contestants received their letters at the end of October.
Since winning the crown in May, Lin was praised by many for her outspoken opposition to China's record of human rights violations. She has particularly focused on defending Falun Gong, a spiritual group that the Chinese government regards as a cult.
Chinese law allows for the arrest of anyone suspected of supporting religious movements that aren't approved by the state.
Lin's moved from China to Canada in 2003. Her interest in human rights began when she heard the stories of other Chinese citizens who said they were targeted by the government.
She has since performed in films about the abuse of Falun Gong members and spoken about the subject to a US Congressional committee in July.
Ike Lalji, chief executive of Miss World Canada, has said that Canada won't send a runner-up to China if Lin is unable to attend as it would be too late since training starts on Saturday.
Lin says that she has spoken to former Chinese Miss World contestants who agree with her stance on China's human rights policies, but didn't want to speak out for fear of risking their own ability to get a visa.
"I'm not speaking without fear, as I've seen the repercussions," Lin says.
After she won the competition earlier this year, Lin's father was contacted by Chinese security forces. They threatened that there would be consequences if Lin continued to speak out. As her father still lives in China, Lin is concerned.
"Dad's really scared. He doesn't really dare to talk to me as he worries his phone is tapped. He doesn't speak his mind anymore."
However, she wants to use her position with Miss World to highlight the issue and defend the Chinese people's right to free speech.
"I'm alone and don't even have any family around me, so it's very difficult. Miss World is an international organisation, and if organisations like this don't speak up against the bullying of their own contestants it will continue. China knows it works and they'll just use it again and again until someone stands up to them."
Regardless of whether Lin gains the right to compete or not, she has said that she will use her position to speak out for human rights. After failing to receive papers on Friday, she is considering a petition to protest against the decision.
"If I'm able to go to China, I want the people to see me. They already know about me and my story as they can go around the firewall. I want them to see I've been true to my conscience, and that they can do it too."
The BBC reached out to Miss World Canada and the Chinese Consulates in Toronto and Ottawa but did not receive a response.