Canada's China-born Miss World contestant said on Tuesday her visa to travel to the beauty pageant at a Chinese resort has been delayed.
She also said her father has been harassed by Chinese officials, because she has spoken out about human rights abuses in the communist country.
Anastasia Lin, an actress crowned Miss World Canada in May, said her determination to speak out about Chinese rights abuses may have cost her a chance to attend the Dec. 19 final in Sanya.
Lin testified at a U.S. Congressional hearing on religious persecution in China in July. In her testimony, she said she wanted to "speak for those in China that are beaten, burned and electrocuted for holding to their beliefs," according to the full text of her statement on the Congressional-Executive Commission on China's website. 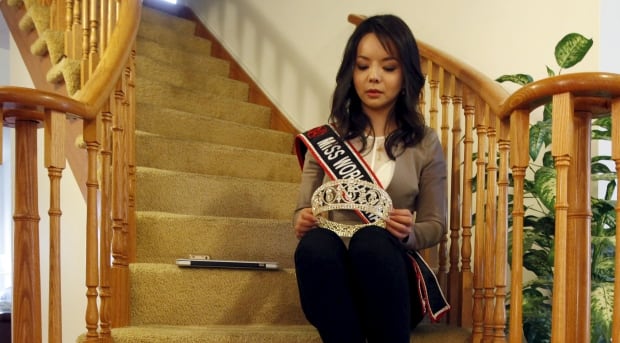 Miss World Canada Anastasia Lin poses with her crown after an interview at her home in Toronto Nov. 10. Lin is an actress and Falun Gong practitioner crowned Miss World Canada in May. (Chris Helgren/Reuters)
"I was interested in human rights way before I even thought of beauty pageants," Lin, 25, told Reuters on Tuesday.
Lin said finalists from other countries had received their invitation from the Chinese host venue that allows them to apply for a visa to attend the finals, but she has received no letter and believes China is trying to block her from the event.

Reuters was not able to independently confirm whether other finalists had received their invitation letters.
"I don't think this is an administrative issue. It is not. I think this is a matter of principle," said Lin, who also is a practitioner of Falun Gong, a spiritual group banned in mainland China.
Chinese Foreign Ministry spokesman Hong Lei, asked about Lin's case, said he "did not understand the situation". He did not elaborate.
Officials from the Miss World organization were not immediately available to comment, and a Canadian contest official did not return calls.
A spokesman at Canada's Department of Foreign Affairs said Ottawa was aware of Lin's case but could not comment on Chinese visa decisions.

"Canada is committed to constructive engagement with China on human rights, which is a core component of our governance co-operation with China," Francois Lasalle, deputy director, media relations division, said in an email.
Falun Gong was banned in 1999 after thousands of members gathered in central Beijing to protest near the Communist Party headquarters. Members of the group say more than 3,300 Chinese Falun Gong practitioners have died in prison or from abuse in a decade-long crackdown.
Lin, who came to Canada with her mother when she was 13, said her father was contacted by Chinese officials after her victory in the Canadian contest brought attention to her campaign against Chinese repression of Tibetan Buddhists and Falun Gong practitioners.
"A few days after (I won), he sent me a text message saying, 'You have to stop your human rights work right now, otherwise our family is going to be turned on' like in the Cultural Revolution. The security agent had approached him, he said," Lin recounted.