The beauty queen that China is determined to stifle 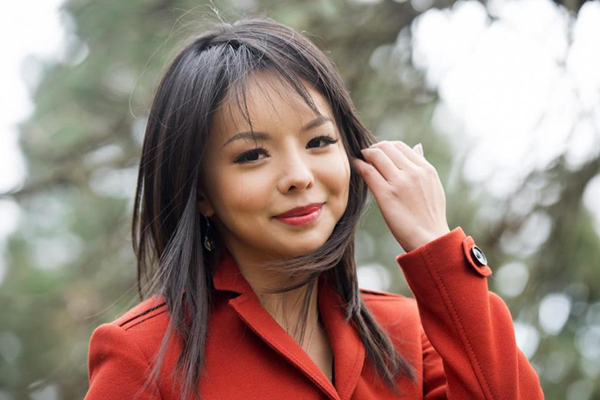 RESISTANCE TO TYRANNY comes in many forms, but Anastasia Lin may be first activist to take the fight against dictatorship to the glittery ranks of a beauty pageant.
Lin, a 25-year-old actress and model, was crowned Miss World Canada in May. By rights, she should have been in the Chinese resort city of Sanya for the welcoming ceremony of the 2015 Miss World competition last Monday.
But Lin, who was born in China, is an outspoken advocate for freedom of conscience in her native land. She has used every platform available to her to raise public awareness of China’s harrowing human rights record — portraying victims of Chinese corruption and repression in award-winning films, describing inbroadcast interviews and newspaper essays what China does to its dissenters, and even testifying on the subject before a congressional committee.
Competing in beauty pageants was another way Lin sought to draw attention to the plight of the persecuted. When she first pursued the Miss World Canada title in 2013, notes The Toronto Star, she performed a piano composition dedicated to “those who lost their life for their faith and the millions of people still fighting for their faith today.” She launched her bid for the 2015 crown with a video underscoring her wish to extend “light and courage to those who still find themselves in the dark.”
Beijing’s communist rulers have no intention of giving Lin an even bigger platform from which to speak out. She is the only Miss World contestant who didn’t receive a visa application from the host country in time to take her place for the 2015 pageant’s opening rounds. It would be heartening to report that the Miss World brass went ballistic when it became clear that Lin was being excluded, and raised holy hell with Chinese authorities to get her admitted.
Alas, the pageant’s attitude toward the strong-willed Canadian beauty has been rather less supportive. When London-based Miss World Ltd. was asked whether it would consider moving the 2015 program if China insisted on blackballing Lin, a spokesperson sniffed: “If we cancel or move the show each time a visa was not granted for a contestant, then it would be impossible to plan the event.”
Though the official Miss World website still lists Lin as a contestant, her photo was removed days ago. On Wednesday, Canada’s Globe and Mail newspaper reported that the Chinese government considered Lin “persona non grata,” putting an endto any realistic hopes she had of competing for this year’s crown.
Lin doesn’t come from a dissident background. As a little girl in China’s Hunan province, she became president of her school’s student council, and readily organized viewings of pro-government propaganda. She recalls screening a video that demonized adherents of Falun Gong — a humble discipline of meditation, breathing exercises, and Buddhist-inspired spiritual readings — and encouraging students to publicly declare their hatred for those who practice it.
Two years later Lin emigrated from China, moving with her mother to Canada. Only then did she come to understand the enormity of the regime she had left behind, and especially its implacable hostility toward Falun Gong practitioners. Tens of thousands of victims, guilty of nothing more than controlled breathing and mindful contemplation, have been arrested, tortured, and even killed. The more Lin learned, the more passionate she became about advocating for China’s oppressed citizens.
Lin’s advocacy comes with the anguished knowledge of the fear it causes her loved ones.
Shortly after winning the Miss Canada crown last spring, she learned that her father, who still lives in China, was visited at his home by government security officials warning him to stifle his daughter — or else. He had overflowed with pride when Lin won the Canadian pageant, but days later he sent an urgent plea: Stop talking about human rights. A survivor of the Cultural Revolution, he was terrified by thoughts of what the government might to do him if his daughter’s activism continued. When she told him she couldn’t keep silent, that letting Beijing intimidate her into muteness would only intensify its ruthlessness, he broke off all contact.
Totalitarian regimes scruple at nothing — not the political manipulation of international beauty contests, not the criminalizing of quiet meditation, not even the blackmail of a father to break his daughter’s spirit. The courage to resist such regimes isn’t easy to come by. Canada’s beauty queen has it in such gallant measure that China fears to let her speak from a Chinese stage. Some other young woman may be crowned Miss World, but it is Anastasia Lin who has been ennobled.