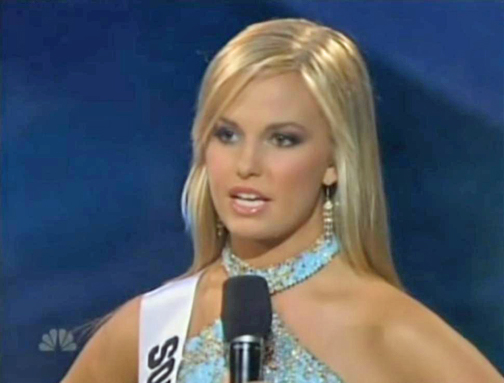 The 2007 Miss Teen USA hopeful who became an Internet sensation following her rambling response to a pageant question was so depressed that she considered suicide.
Caitlin Upton, the contestant from South Carolina, told New York Magazine she struggled to move on for years after the memorable blunder — a now-infamous fumbling of words during the pageant's interview portion.
"I definitely went through a period where I was very, very depressed," Upton, now 26, told the magazine. "I had some very dark moments where I thought about committing suicide."
Upton was asked at the pageant why she believed a fifth of Americans couldn't point out the United States on a map.
"I personally believe that U.S. Americans are unable to do so because, uh, some, uh, people out there in our nation don't have maps," she began.
"And, uh, I believe that our education like such as in South Africa and, uh, the Iraq, everywhere like such as, and, I believe that they should, our education over here in the U.S. should help the U.S., uh, or, uh, should help South Africa and should help the Iraq and the Asian countries, so we will be able to build up our future," she said.
The original video of Upton's answer has amassed more than 63 million views in the 8 years since it was posted to YouTube, and it was the most viewed video on the site in September 2007, a month after the pageant.
The 18-year-old stunner went on to finish fourth in the show, but remained the most talked about contestant — perhaps most notably at a University of South Carolina party.
"I walk in, and the entire USC baseball team surrounded me and bashed me with the harshest, meanest comments I had ever heard," she told the magazine.
The bullying didn't stop there, however. Upton also remembered a horrific letter she received saying she was going to be eaten by fire ants and burned in a fire.
"Then it said, in all caps, 'GO DIE CAITE UPTON, GO DIE FOR YOUR STUPIDITY,' " she said. "That's the kind of stuff people would say to me for two years.
Upton, who later explained on the "Today" show that she was overwhelmed and didn't correctly comprehend the question, is brunette now and says she's no longer recognized from the notorious pageant.
In fact, she says she's recognized much more now for having a name resembling that of supermodel Kate Upton.
"I'll go into my auditions and be like, " 'Yes, yes, I know — I'm the other one.' "