"Most of the girls had voted for Miss Philippines," says South African delegate to Miss Universe 2015 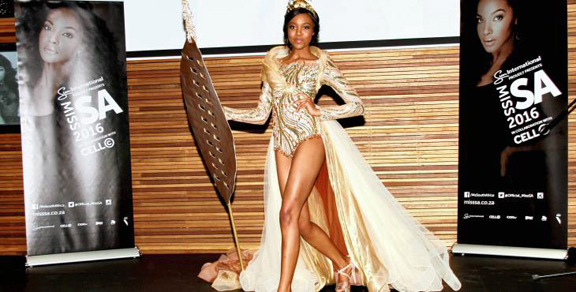 Durban - Miss South Africa First Princess Refilwe Mthimunye, 24, was among Miss Universe contestants on stage when TV host and comedian Steve Harvey announced the wrong winner of the pageant.
Harvey mistakenly announced during the live broadcast that Miss Colombia Ariadna Gutierrez-Arevalo had won on December 20.
The model walked around the stage with the crown for a few minutes before Harvey corrected his mistake and announced that the actual winner was Miss Philippines, Pia Alonzo Wurtzbach.
It was one of the most embarrassing and awkward moments that still has social media abuzz.
Speaking to the Sunday Tribune, Mthimunye said when Harvey announced Miss Colombia all the contestants were shocked and confused because they had voted for Miss Philippines.
“The contestants got to vote for who should take the crown, this is based on how she answered a question and on her personality. We had spent two weeks together and we knew each other. Most of the girls had voted for Miss Philippines. When the winner was announced the autocue machine we were looking at had the correct name, but Steve announced Miss Colombia. For a few seconds we kept quiet and looked at each other with shock because we knew who we had voted for,” she said.
Mthimunye made it into the top 15.
She said this would be her last pageant.
Miss South Africa, Liesl Laurie, could not participate in Miss Universe as she was at the Miss World pageant.
Mthimunye said the blunder robbed the winner of the happiness she deserved.
“When Steve corrected his mistake, we were relieved, but it was still awkward because there was Miss Colombia heartbroken and trying to be strong and the actual Miss Universe not sure if she should be excited. She feared the crown would also be taken from her. I went to congratulate her because she really deserved it. I also had hope that maybe they made a mistake by eliminating me,” said Mthimunye.
Claudia Henkel, Miss South Africa 2004 and Miss Universe 2005 contestant, said what happened was completely unacceptable.
“My heart goes out to Miss Colombia…, I think when she got home everything came back and it hurt her, it is a feeling that she will never get rid of,” said Henkel.
South African publicist, Melanie Ramjee, said: “It was the most spoken about event on social media for over a week. But I believe it was a genuine mistake on his part. It didn’t look rehearsed. Also the announcement card should have been printed separately as it usually is at these pageants.”