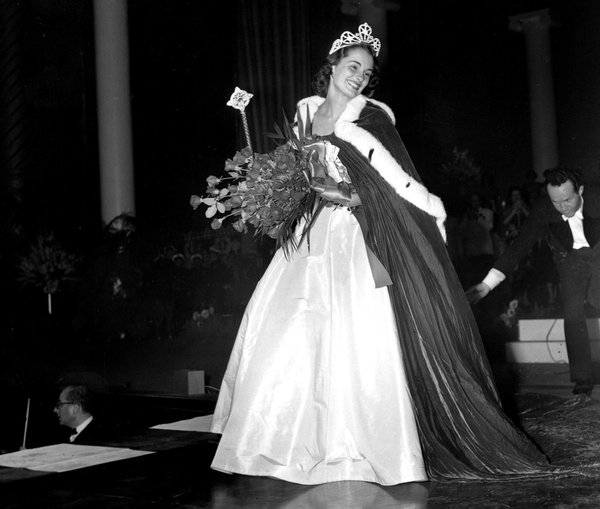 Yolande Betbeze Fox, a convent-educated Alabamian who defied convention, and set new standards, by refusing to tour the country as Miss America of 1951 in revealing bathing suits, died on Monday in Washington. She was 87.

Her death was confirmed by the Joseph Gawler’s Sons funeral home in Washington.

By the time Ms. Fox won her title on Sept. 9, 1950, in Atlantic City, pageant officials, trying to calibrate propriety and sex appeal amid changing mores, had already decided to stop crowning Miss America while she was wearing a swimsuit. That pageant staple had been confined to the swimsuit competition, an event Ms. Fox — Ms. Betbeze at the time — had already won. She began her reign in a gown.

But given that the swimsuit competition’s chief sponsor, Catalina, manufactured swimwear, Ms. Fox was still expected to model bathing suits as the reigning Miss America.

What the organizers did not expect was her response. “Yolande declared, ‘I’m an opera singer, not a pinup!’ and refused posing in a bathing suit again,” according to her official biography on the pageant’s website.

As a result, Catalina withdrew as the pageant sponsor and began the rival Miss USA contest.

“In Yolande’s words, she made a stand for ‘propriety’ that has gone down as a significant flash of pageant history and altered the course of its future,” the official biography says.

Ms. Fox put it another way in an interview with The Washington Post in 1969: “There was nothing but trouble from the minute that crown touched my head.”

Ms. Fox never fulfilled her goal of becoming a professional opera singer, though she belted out “Caro Nome” from “Rigoletto” in the talent competition. But she used her newfound fame to become a model, theatrical producer and social activist.

She participated in a vigil in 1953 at Sing Sing prison to protest the impending execution of Julius and Ethel Rosenberg, the Manhattan couple convicted of conspiring to commit espionage. She joined civil rights protesters in picketing a Woolworth’s in Times Square in 1960 to support black sit-ins at the store’s lunch counters in the South. (“I’m a Southern girl, but I’m a thinking girl,” she said.) And she joined demonstrations against nuclear weapons.

In a 2006 profile, Smithsonian magazine said Ms. Fox’s “exotic Basque looks” — she was of Basque ancestry — and her rebellious streak may have made her “the most unconventional Miss America ever.”

Yolande Betbeze (her mother picked her given name from a book of medieval history) was born in Mobile, Ala., on Nov. 29, 1928, the daughter of William and Ethel Betbeze. Her father was a butcher.

She was educated in Roman Catholic convent schools and the extension division of the University of Alabama. She began her beauty contest career in 1949, when she won Spring Hill College’s Miss Torch pageant. She entered the Miss Alabama competition hoping to win a scholarship to study singing in New York.

After her one-year reign, she studied philosophy at the New School for Social Research in New York; married Matthew Fox, a movie executive (they had a daughter, Yolande Fox Campbell, who survives her, along with a granddaughter); and produced theater in a playhouse on East Houston Street.

She later moved to Washington, where she bought the Georgetown mansion formerly owned by Jacqueline Kennedy Onassis and became a fixture of the capital’s social scene.

In the 1960s, Ms. Fox criticized the Miss America pageant for its lack of ethnic and racial diversity. “ ‘How could we say it’s Miss America,’ I asked, ‘if it’s not open to all Americans?’ ” she was quoted saying in “Alabama Afternoons: Profiles and Conversations,” a 2011 book by Roy Hoffman. In the 1970s, she said the pageant perpetuated sexist attitudes.

“Today,” the Miss America website says, “Yolande feels her actions have been pivotal in directing pageant progress towards recognizing intellect, values and leadership abilities, rather than focusing on beauty alone.”