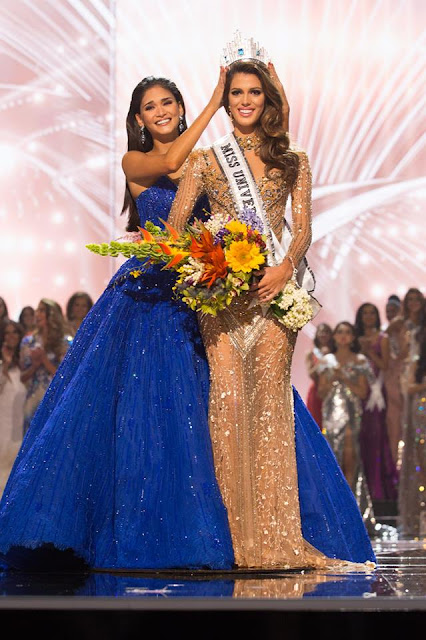 MANILA, Philippines –  A 23-year-old dental student from France won the Miss Universe crown Monday in the annual pageant held in the Philippines, saying her triumph will make the beauty contest more popular in Europe and help her efforts to put more underprivileged children in school. This is the second time in the history of the competition that the pageant skipped the entire year, following the 2014 pageant which was held in January 2015.
Iris Mittenaere from Lille city in northern France buried her face in her hands in shock and joy as the outgoing winner from the Philippines, Pia Wurtzbach, crowned her and the crowd erupted in cheers at the packed Mall of Asia Arena by Manila Bay.

Miss Haiti, Raquel Pelissier, a 25-year-old survivor of the devastating 2010 earthquake that destroyed her hometown, was named first runner-up, while Miss Colombia, 23-year-old industrial designer and photographer Andrea Tovar, was second runner-up.
The top finalists hailed from Kenya, Indonesia, Mexico, Peru, Panama, Colombia, Philippines, Canada, Brazil, France, Haiti, Thailand and the USA. The pageant changed its format this year; it had 12 instead of 13 finalists, and counted online votes from the Miss Universe app and Twitter.
"I think France and Europe really need a Miss Universe," Mittenaere said in a post-pageant news conference when asked how her countrymen would receive her victory, the first by a French woman in more than 60 years. The beauty contest has not been as popular in France as in other countries, she said, but "French people will love it now and every year they will be watching Miss Universe."
"I'm very proud to bring this crown to Europe," she said.
Mittenaere said she would focus during her reign on helping all children, especially girls, attend school.
Pellissier said surviving Haiti's quake, which officials in her country estimated killed more than 300,000 people and displaced more than 1.5 million others, and her pageant success underscored her rise from adversity because she "chose to be a very positive person and learned a great lesson from it."
"If I am here today, it is because I am living my dreams," said Pelissier, who is studying for a master's degree in optometry research.
Eighty-six candidates vied in this year's pageant, which was formerly owned by Donald Trump. This was the first time Sierra Leone entered the competition and was represented by Hawa Kamara, 2013 Miss West Africa. Miss Canada, Siera Bearchell, also made headlines for taking on trolls who body-shamed her for her size.
As he closed the ceremony, American comedian host Steve Harvey declared, "I got it right," referring in jest to his mistaken announcement of Miss Colombia as the winner in last year's pageant in Las Vegas. He was roundly criticized for the embarrassing error.
"One thing I learned in life, when you make a mistake, you gotta keep on moving forward man, that's all," Harvey said.
In her farewell remarks as the outgoing winner, a smiling Wurtzbach thanked Harvey for making her "the most popular Miss Universe." Harvey, laughing, thanked her for making him the most famous Miss Universe host.
Judges initially selected a dozen candidates, with a 13th picked through online balloting involving 100 million votes worldwide.
Source: CNN/FoxNews, 1/30/2017