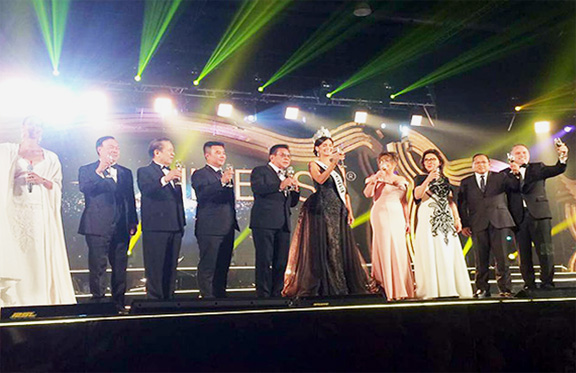 With less than two weeks left until the next Miss Universe is crowned on January 30, pageant host country Philippines gave at least 86 candidates a taste of Filipino hospitality in a welcome dinner attended by several cabinet secretaries, senators, mayors, and A-list celebrities in a Governor’s Ball Monday night.

The Governor’s Ball, held at the SMX Convention Center in Pasay City, was named after former Ilocos Sur Governor Luis “Chavit” Singson of the pageant host committee, LCS Group of Companies. Singson, in his opening remarks, mentioned how it took the Philippines 22 years to bring the prestigious pageant back to its shores. “Tonight we officially mark the opening of the 65th Miss Universe competition. The long haul to bring the pageant back to the Philippines has ended. We have succeeded,” Singson said.

Singson also thanked the Miss Universe Organization (MUO) for the opportunity and blessing “to show the world the generosity of the Filipino spirit and the richness of culture.” He, meanwhile, expressed hope that even after the pageant, the candidates and their fans and supporters would visit the Philippines again. “To many of you, we know this is your first visit to the Philippines and hope that you return again and again to visit our spectacular beaches and other tourist spots,” the former governor said.

Reigning Miss Universe-Philippines Pia Wurtzbach, in an interview, expressed excitement in finally being able to meet the candidates from different countries. “I can’t wait to meet them, hear their stories, hear about their experience and I look forward to making more friends,” Wurtzbach said. Wurtzbach arrived the SMX Convention center accompanied by Singson.

Former Miss Universe-Philippines Gloria Diaz (1969), in a separate interview, said that the Philippine hosting of Miss Universe was an opportunity to showcase the “good side” of the Philippines amid negative news. Diaz added she was also excited to finally meet Philippine bet Maxine Medina. Asked if she was looking at a back-to-back win, Diaz said that it was a “once in a million chance” but possible. The 65-year-old former beauty queen, meanwhile, urged Medina and other candidates to just enjoy the pageant whether they win or lose.


SEE Photos from the Governor's Ball