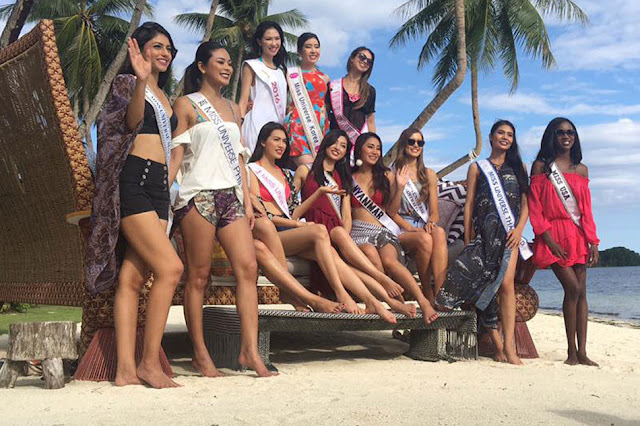 Arlene Brosas, a representative of the Filipino feminist group Gabriela, on Wednesday opposed the hosting of the Miss Universe pageant in the Philippines, calling it an objectification of women and a cover-up of the country’s societal problems.

In a prepared statement read during a press conference, Brosas said the hosting was a “manipulative and deceptive tool that projects an image of peace and stability to cover up the creeping influence of fascist repression of poor women’s rising protests.”

Brosas said the beauty pageant is an “expensive exercise to lull the people and the international audience into a false sense of wellbeing and celebration” amid problems in society such as unfair trade relations and the plunder of natural resources in the countries the beauty queens represent.

“Gabriela opposes pageants and other festivals that exploit women and as these are tools to commodify women and use the competitions to promote commercial use of women’s image in marketing products and services on a globalization-oriented trade regime,” Brosas said.

Brosas said this year’s hosting of the Miss Universe pageant is “yet another attempt to package the Philippines as a lurid tourist destination for cheap, easily exploitable women.”

She said the Philippines should not join such pageants.

“Malinaw ang stand ng Gabriela na kung ito ay makakapang-abuso sa mga kababaihan, hindi dapat natin sinasalihan (Our stand is clear that if the pageant is abusive to women, we should not be joining these),” Brosas said.

Brosas said the late beauty queen Maita Gomez, who won the Miss Philippines-World title in 1967 and represented the country in the Miss World tilt that year, even joined Gabriela in picketing the 1994 Miss Universe pageant in Manila and slammed then President Fidel Ramos as a “world class pimp.”

The beauty queens are also set to visit the cities of Vigan, Cebu, Baguio and Davao.
The Philippines first hosted the pageant in 1974 and again in 1994. This is the third time the country is hosting the pageant.

he Philippines won the title in 2015 albeit a controversial one after its host Steve Harvey wrongfully crowned Miss Colombia Ariadna Gutierrez.

Gutierrez had to be decrowned on live telecast to give way to the rightful queen the Miss Philippines Pia Alonzo Wurtzbach.

Wurtzbach is the third Filipina to win the title, ending a title drought of 42 years for the Philippines. Wurtzbach during her reign pushed for her advocacy of promoting awareness about HIV.

The Philippines last took home the crown in 1973, courtesy of Margie Moran. It was a short wait after the victory of Gloria Diaz in 1969.

The Philippines’ bet this year is Maxine Medina, who promised a back-to-back victory for the country.