Sushmita Sen To Return To Manila As Miss Universe Judge 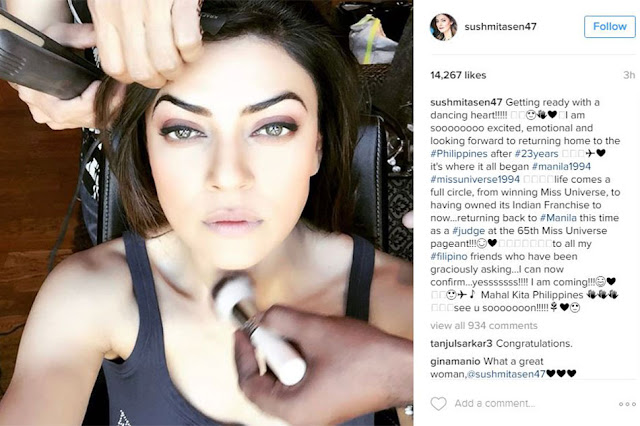 Former titleholder Sushmita Sen is set to return to the Philippines after 23 years, to serve as one of the judges during the 65th Miss Universe pageant at the end of the month.
Sen expressed her excitement in a post on social media site Instagram, where she said she is “getting ready with a dancing heart” to return to the Philippines, where she was named Miss Universe in 1994.
She was the first Indian to win the crown.
“I am so excited, emotional and looking forward to returning home to the Philippines after 23 years. It’s where it all began. Life comes full circle from winning Miss Universe to having owned its Indian Franchise to now…returning back to Manila this time as a judge,” she wrote.
After relinquishing the Miss Universe title to her successor, she went on to become an award-winning Bollywood actress in India.
Earlier in January, Tourism Secretary Wanda Teo said that there will be no Filipinos in the roster of judges for the Miss Universe 2016 pageant, and that all judges will be chosen by the Miss Universe Organization.
While not informed of the whole roster, she said that some of the judges are former beauty queens.
To be hosted by American game show host Steve Harvey and model Ashley Graham, the Miss Universe coronation night will be held on January 30 at the Mall of Asia Arena.
Social media personality Bretman Rock on Friday revealed that he will be host of the pageant’s red carpet special.
Watch the 65th Miss Universe coronation live on ABS-CBN Channel 2 on January 30, 2017 Monday 8 a.m. (Manila time)
Source: ABS-CBN, 1/21/2017