Gorgeous Christina Mikkelsen, 24, became caught up in a criminal investigation after her former flame, Teodorin Obiang, was accused of money laundering.
Now, the organisers of the Face of Denmark have stripped Christina of her crown after competing in Miss Universe 2016, citing the investigation as the main reason.
As well as his super yacht, Ferraris, Lamborghinis, an Aston Martin and a Bugatti were also seized from Mr Obiang as part of a long-term investigation.
Mr Obiang, who is the vice president of Equitorial Guinea, has been the subject of a long-term investigation over claims he has spent Government money on himself.
But Christina's dismissal comes after she accused the "Face of Denmark" organizers of trying to force her to lose weight.
Despite sporting a toned look and weighting only 8st 5lbs, she claims bosses told her to lose more than a stone before the Miss Universe beauty pageant.

But John Paul Hamilton de Voss who was associated with Miss Denmark claims he only meant to ask her to lose eight pounds.
Taking to Facebook, Christina thanked her fans for their support during the investigation.
She wrote: "Hi everyone. I gotta admit the last few days have been overwhelming. I just wanna take the time to say thank you, thank you from the bottom of my heart for all your sweet messages.
"A big thank you to and especially My family, without them I wouldn't be able to get through the last few months. I regret absolutely nothing, even though I obviously had to lose my title and crown to speak my mind [sic]."
"We grow throughout their lives, and I must say that I have learned so much here lately. No one should ever tell us we're not good enough. We are good enough just as we are."
Daily Star Online has contacted Christina and the Face of Denmark competition for their response.
Source: Daily Star, UK, 2/8/2017 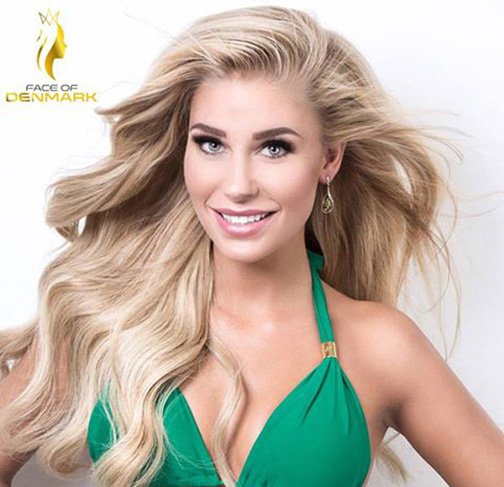 FACE OF DENMARK: Christina was told to lose weight by organisers

Related news: Miss Universe Denmark stripped of her title over 'links to a criminal investigation' - after ex-boyfriend - the son of an African dictator - has $100 million yacht seized in Swiss money laundering probe