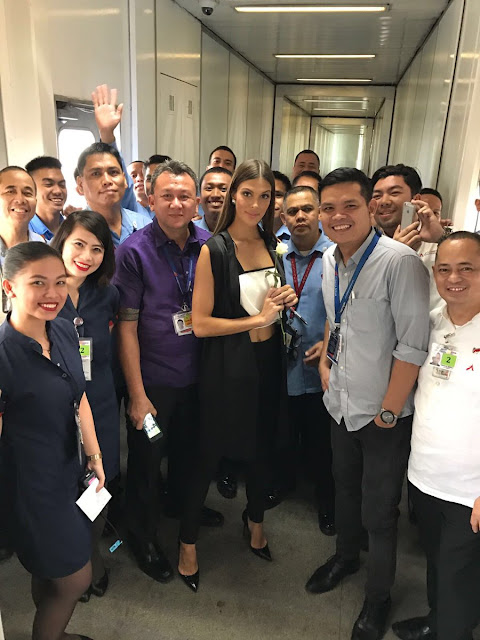 
Newly crowned Miss Universe Iris Mittenaere of France said that the Philippines will always be in her heart, referring to the country as her “second home.”
Uploading a photo taken at the Ninoy Aquino International Airport (NAIA) just before she left Manila last Thursday afternoon, the beauty queen said: “Last hour in my second home… Philippines forever in my heart. Mahal ko kayo.”
Miss Universe left for New York where she will start her reign.
At the airport, Mittenaere hardly stopped waving at the Filipino fans who took photos of her with their cellphones.
The headquarters of the Miss Universe Organization is located in New York City. Mittenaere will share a flat with reigning Miss USA Deshauna Barber and Miss Teen USA in the Big Apple.
Mittenaere, 24, won the 65th Miss Universe beauty pageant held at the SM Mall of Asia in Pasay City January 30. She bested 85 other candidates for the prestigious title.
PRIZES
The Miss Universe prize package includes: A year-long salary as Miss Universe; luxury accommodations in a New York City apartment for the duration of her reign, including living expenses; a one-year supply of hair care products and tools from Farouk Systems, the makers of CHI Haircare; a shoe wardrobe from Chinese Laundry Shoes & Accessories; a personalized face chart and products from MAC Cosmetics;
Personal services, including membership to Gravity Fitness @ Le Parker Meridien Hotel and hair services from John Barrett Salon; a modeling portfolio by leading fashion photographers; dermatology and skincare services; a professional health and nutrition consultation; dental services;
Professional representation by The Miss Universe Organization; extensive travel representing sponsors and charitable partners; access to various events including casting opportunities, movie premiers, screenings, Broadway shows and launch parties; and personal appearance wardrobe and styling by the official Miss Universe Organization fashion stylist.
IN A RELATIONSHIP
Meanwhile, the Daily Entertainment News website revealed that Mittenaere is currently in a relationship with a hunky doctor identified as Matthieu Declercq.
“I have someone in my life who supported me,” said Mittenaere after she was crowned Miss France in December, 2015.
But the couple has been very discrete about their relationship because the rules of the Miss France committee states that the beauty queen is not allowed to appear with her boyfriend in public.
Last year, Declerq revealed in an interview that he was not afraid of not seeing much of his girlfriend. He added that he is proud of her, the report added.
The report also said that Declercq, who is very supportive of his girlfriend, watched the Miss Universe 2016 pageant in Manila.
$15 M INVESTMENT
In a related development, former Governor Chavit Singson of Ilocos Sur said that his group invested some US$15 million (P675 million) for staging the third Miss Universe pageant here.
Singson, head of the LCS Group of Companies, which brought the pageant to Manila, said: “Ang gastos namin mga $15 million pero sulit na sulit yun dahil I consider it as an investment.   Lugi lang tayo kung walang turista pero I’m sure, pinag-uusapan na tayo sa buong mundo (We spent about $15 million but that was all worth it and I consider that an investment. We will lose if we have no tourists, but I’m sure we are being talked about around the world).
Singson also said 10 Miss Universe candidates are still here enjoying their trip to the Philippines.
Source: Manila Bulletin, 2/4/2017