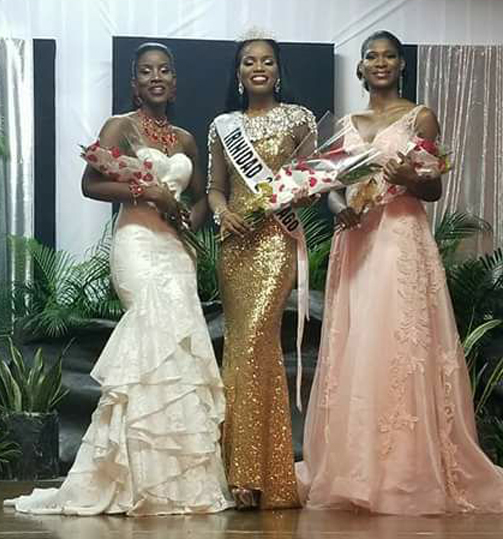 This country’s Miss Universe T&T pageant first runner-up Martrecia Alleyne (left) is now being considered to replace stripped delegate Yvonne Clarke (center).
The local franchise holder for the pageant, Jenny Douglas, was weighing this option yesterday after she stripped Clarke of her title over an alleged breach of contract nine days before she was due to leave for the international event in Las Vegas.
Less than two weeks after winning the title, Clarke was told via email from Douglas that she would no longer be able to represent the country.
But during a press conference at the St James studio of soca artiste Fay Ann Lyons yesterday, Clarke demanded an apology from Douglas, saying she did nothing wrong in seeking sponsorship on her own, including from Lyons. She claimed she was left with no choice after all she received from Douglas was an “old black dress” and an admittance they did not have “all the resources” to get her to the competition.
“I asked her if there was anything else the franchise could give me beside a dress and she (Douglas) said no. I did not do anything without the authorisation of the franchise holder. She even sent me letterhead from the Miss Universe TT which to this day I did not use,” Clarke maintained at the press conference.
She said Douglas told her she could seek sponsorship from anyone locally “except from the Government.” She said from day one of the local pageant she felt something was wrong, as there were several “hiccups” along the way. This, she said, prompted her to document all her conversations with Douglas, including taping telephone conversations.
Saying she was forced to dip into her personal finances to prepare herself, Clarke said through a friend she was told to approach Lyons for help.

Lyons, Clarke said, had been instrumental in getting her a plane ticket, professional hair and make-up artists and even organising several professional photo shoots.
As she went through hardship getting sponsorship, Clarke, who broke down in tears at some points, said she also offered advice to Douglas regarding how to deal with issues on social media.
“I said to Jenny digital media management is important because she was getting into feuds with citizens on social media about the way in which the franchise was being run. I told her to avoid social media conflict because it not only brings the Miss Universe pageant into disrepute but it also brings me, as a delegate, into disrepute,” Clarke said.
“The reason why I am so hurt by this was because when T&T was bashing her and saying she was unprofessional I was the one who supported her.”
She also accused Douglas of deliberately withholding her contract after she signed it some months ago.
Douglas also hinted that Clarke may not have had a US visa but yesterday Clarke said she did.
Lyons, who also spoke, said she too wanted an apology from Douglas, as all she did was help a “beautiful and talented young lady” realise her dream. She described the incident as unfortunate, saying too many times “we as a people” refuse to support each other.
“I was very disappointed because some people had some ridiculous comments to make,” Lyons said.
In a statement yesterday, Douglas said, “The Miss Universe T&T committee has voted unanimously to disqualify Miss Yvonne Clarke from representing Trinidad and Tobago in this year’s Miss Universe 2017 Pageant competition.
“We are saddened by this turn of events, however, we have to maintain our strict contractual agreements. We will, however, make sure another suitable representative will go and who will abide by the Miss Universe T&T rules and regulations under their contractual agreement.”
In an interview with Guardian Media, Douglas also accused Clarke of making statements which “misrepresented” the franchise and of “being on television and begging for money.”