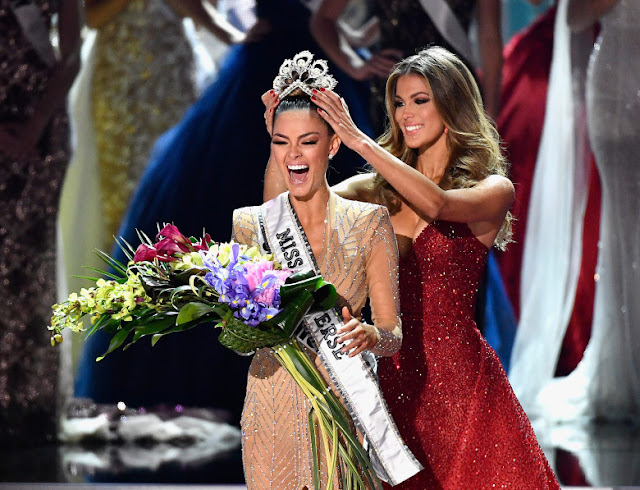 Demi-Leigh Nel-Peters won the second Miss Universe crown for her country, South Africa, on Sunday, November 26, from the AXIS at Planet Hollywood Resort and Casino in Las Vegas, Nevada. The 22-year-old beauty queen zoomed all the way to the final judging after acing her final question. Crowning her was Miss Universe 2016, Iris Mittenaere, of France, who won the 65th edition in the Philippines.
The last time South Africa won the title of Miss Universe was in 1978 with the then-18-year-old Margaret Gardiner in Acapulco, Mexico. Her win made South Africa the first nation in Africa win, and her the first African woman to win the prestigious title.
She clinched the title through the final question round where she was asked, “What quality in yourself you are most proud of and how will you apply it in your time as Miss Universe?”
“As Miss Universe, you have to be confident of who you are as an individual. A Miss Universe is a woman that overcome many fears. And by that, she will be able to help other woman overcome their fears. She is a woman that nothing is ever too much to ask for and I think that is exactly who I am. Thank you.”
The brunette beauty from Sedgefield, Western Cape, bested 91 other delegates from all over the world. Miss Colombia Laura González and Miss Jamaica Davina Bennett finished as first runner-up and second runner-up, respectively. Meanwhile, Keysi Sayago (Venezuela) and Maria Poonlertlarp (Thailand) completed the top 5.
Misses USA, Philippines, Canada, Spain, and Brazil aced the swimsuit competition and advanced to the Top 10. Completing the top 16 were delegates from Sri Lanka, Ghana, Ireland, Croatia, Great Britain, and China. 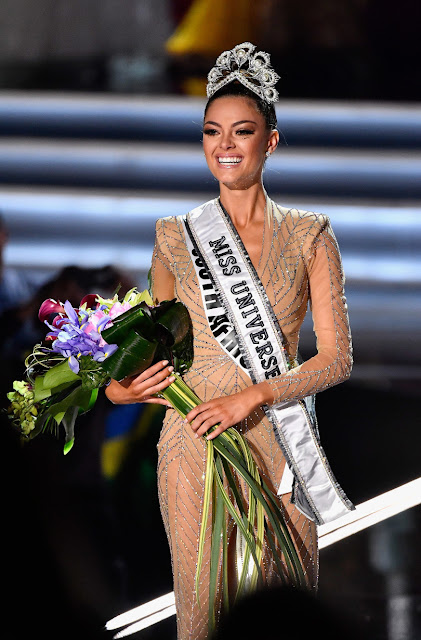 Monopolizing the pageantry gig, Steve Harvey was back as host of the Miss Universe 2017. The veteran host infamously announced the wrong winner in 2015. That live television brouhaha snatched the world’s attention and attracted many partners and sponsors supporting the organization.

At the start of the telecast, Harvey interrupted the viewers announcing major changes in the selection of the top 16. The 66th edition of Miss Universe used a different process to select the semifinalists. For the first time in the pageant’s history, nine girls in the top 16 would be selected from three subdivided continental regions, namely, the Americas, Africa and Asia-Pacific, and Europe. Completing the semifinalist sets were the wildcard candidates, which aced preliminary rounds regardless of their region.
Tasked with the toughest job in the competition were the panel of judges, chaired by Farouk Shami, with Ross Matheus, Lele Pons, Jay Manuel, Pia Wurtzbach, Megan Olivi, and Wendy Fitzwilliam serving on the panel.
Also returning as backstage host was supermodel and body positivity activist Ashley Graham, with Lu Sierra and Carson Kressley providing the analysis and commentary during the telecast. Fergie and Rachel Platten were the guest performers for the night.
Miss Japan Momoko Abe won the Best National Costume Award. Be sure to check out the colorful showcase of culture and international artistry at Miss Universe 2017 National Costume here.