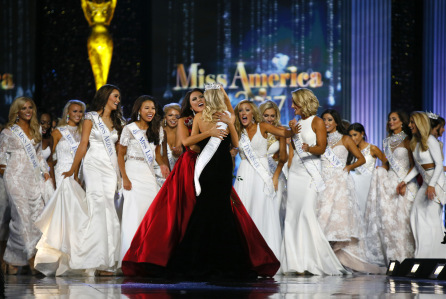 2nd UPDATE, 12:03 PM: Miss America Organization CEO Sam Haskell resigned his post today amid an investigation into offensive emails he sent about a pageant winner. In a statement He has resigned along with president and COO Josh Randle and Lynn Weidner, the board chair who sent emails involved in the controversy.
Related
Two More Ex-Fox News Employees Join Defamation Suit Against Bill O'Reilly - Update
According to a Twitter post from Dan Meyers, who is taking over as interim chairman, Weidner will remain on the board during a transition period:
UPDATED, 5:30 PM: The Miss America Organization suspended its chief executive today, less than 24 hours after emails surfaced in which he disparaged the appearance, intellect and sex lives of a pageant winner, the Associated Press reported.
The organization said Sam Haskell would be suspended while the board conducts an in-depth investigation into the “alleged inappropriate communications” and the way in which they were obtained.
Haskell issued a statement attacking reporting of the incident as “dishonest, deceptive and despicable.”
“The material is based on private emails that were stolen three years ago by ex-employees,” Haskell wrote. “The story is so unkind and untrue, and hurts me, my family, and the stewardship of this nonprofit. Those who know my heart know that this is not indicative of my character, nor is it indicative of my business acumen.”
PREVIOUSLY, 10:13 AM: Dick Clark Productions has cut ties with the Miss America Organization after learning several months ago of offensive, sexist and cruel emails regarding past Miss America winners written by the beauty pageant’s CEO Sam Haskell.
DCP, which produced the nationally televised broadcast, says it severed relations with the group “shortly after” learning of the emails several months ago. News of the rift — and the emails — came to light with yesterday’s devastating Huffington Post article in which writer Yashar Ali unveiled three years worth of old emails in which Haskell joked about referring to past pageant winners as “c*nts.”
Haskell joined Miss America’s board in 2005 after retiring from the William Morris Agency as worldwide head of television.
ABC is set to air the 97th Miss America Pageant is set to air live from Atlantic City on September 10, 2018, with hosts Chris Harrison and Sage Steele. Deadline has reached out to ABC for comment.
Wrote Ali, “Haskell’s behavior behind closed doors shows he regularly maligned, fat-shamed and slut-shamed the former Miss Americas, calling them shocking names and in one case laughing at the suggestion that one of the women should die.”
In a statement to Deadline, DCP said: “Several months ago, dick clark productions was made aware of a portion of the emails that were referenced in the December 21 Huffington Post article. We were appalled by their unacceptable content and insisted, in the strongest possible terms, that the Miss America Organization (MAO) board of directors conduct a comprehensive investigation and take appropriate action to address the situation. Shortly thereafter, we resigned our board positions and notified MAO that we were terminating our relationship with them.”
DCP and the Miss America Organization entered a co-production deal in 2014 and have co-produced the show since the 2015 pageant.
The emails written by Haskell to a writer for the pageant were provided to HuffPo by two sources. “They reveal a CEO who regularly wrote and responded to unprofessional, offensive emails about the women who poured their hearts into the pageants and the organization he was leading,” Ali wrote.
Haskell told the Associated Press that he has apologized to the pageant board and will further address the controversy today.
Since the story’s publication Thursday, 49 former Miss Americas are calling for the resignations of the organization’s top leadership: CEO Haskell, President Josh Randle, board Chair Lynn Weidner and board member Tammy Haddad.
Among the revelations alleged in the lengthy HuffPo story is Haskell’s apparent dislike for Gretchen Carlson, the 1989 Miss America winner and member of the organization’s board of directors. At issue, reportedly, was Carlson’s push to modernize the organization.
In one email to a colleague, Haskell wrote, “Brilliant…..f*cking Brilliant!!!! That will drive Gretchen INF*CKINGSANE.” After Carlson resigned from the board, Haskell crowed that Carlson “couldn’t be trusted.”
In a response to to HuffPost Thursday, former Fox News personality Carlson said: “As a proud former Miss America and former member of the Board of the Miss America Organization, I am shocked and deeply saddened by the disgusting statements about women attributed to the leadership of the MAO. No woman should be demeaned with such vulgar slurs. As I’ve learned, harassment and shaming of women is never acceptable and should never be tolerated. Every MAO executive and board member who engaged in such crude behavior and signed off on it like it was no big deal should resign immediately. The Miss America Organization, which is tasked to uphold an almost 100 year old tradition of female empowerment and scholarship, deserves better. I hope all former Miss Americas, state and local titleholders and volunteers will join me in a collective effort to fight for the dignity of this great institution.”
Source: Deadline.com, 12/24/2017