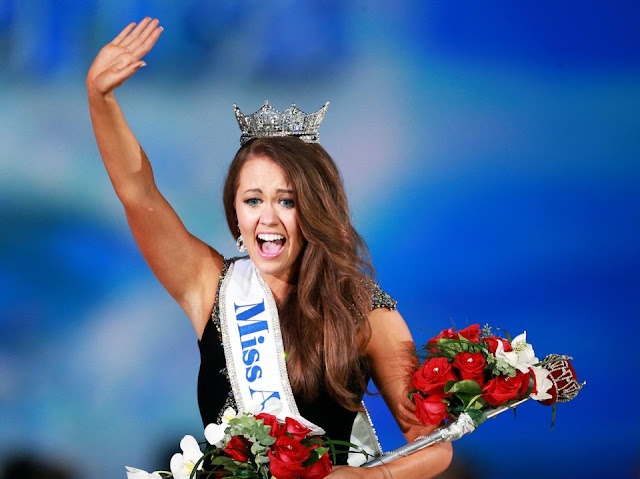 The Casino Reinvestment Development Authority has overlooked a major scandal in the Miss America Organization, approving state funds that will ensure the pageant will remain in Atlantic City through September.
After CRDA officials repeatedly called for a review of its contract with the pageant in the wake of a major controversy over the former Miss America CEO's leaked emails last year, the authority on Tuesday approved $4.3 million in state subsidies for the pageant, the Philadelphia Inquirer reports.
Former pageant CEO Sam Haskell's email correspondence with staffers, leaked to HuffPost, which published a report in December, referred to former Miss Americas with derogatory slang for female genitalia and contained negative comments about the physical appearance of a former Miss America, among other offenses.
"The CRDA is encouraged by the Miss America Organization's description that the 2019 competition will be updated to include a focus on women's empowerment and other related projects," said Robert Mulcahy, chairman of the CRDA board of directors.
Though local officials, including Atlantic City Mayor Frank Gilliam, had initially bristled at the notion of the pageant proceeding unchecked, they seemed to warm to the idea of supporting the pageant's efforts to rebrand under a female leadership largely composed of previous pageant winners.
"They are trying to right the wrongs of the previous administration," Gilliam told the Press of Atlantic City in February.
$12.5 million over three years, with this being the final year of that agreement. (That deal was actually an increase from the previous deal that brought the pageant back to Atlantic City from Las Vegas in 2013, to the tune of $7.3 million over three years.)
The decision, made on Tuesday, means the pageant will be able to stay in Atlantic City for the 2019 pageant in September. That event was the final year included in Miss America's three-year contract with the CRDA.
But the validity of the pageant's contract was called into question after emails between former CEO Haskell, a pageant scriptwriter and Miss America executives revealed misogynistic language and disparaging comments about former Miss Americas. In response, former Miss Americas banded together to call for Haskell's resignation. He resigned in December alongside other Miss America executives, and the pageant board was reconstructed with former Miss America and former Fox News host Gretchen Carlson as chairwoman and other former titleholders in leadership positions.
CRDA officials took issue with the content of Haskell's emails. Yet Dick Clark Productions, the pageant's partner, had also dropped the pageant after being presented with the content of emails from Haskell and Miss America executives. That was a problem because under the pageant's contract with the CRDA, Dick Clark Productions was supposed to work to promote Atlantic City during its programs. It turns out CRDA officials were also aware that Dick Clark Productions had severed ties with the pageant two months before the HuffPost report on the emails went public.
This is also the pageant's last year of its three-year contract with ABC. In the wake of the scandal over Haskell's emails, the pageant faced losing not only its relationship with Dick Clark Productions -- which had made Miss America a presence at its shows, including the Billboard Awards -- but also potentially any future deals with the CRDA and ABC, meaning the competition could scramble to find a new host city and broadcast partner.
But Carlson, the new head of the pageant, is banking on major changes to the pageant, with the aim of focusing on empowerment and leadership. She has been dropping hints that she intends to reform the nearly 100-year-old event, and possibly drop the infamous swimsuit competition in the process.
In recent years, there have also been other changes within the pageant ranks.
In 2016, Miss Missouri, Erin O'Flaherty became the first openly gay Miss America contestant. Just this week, Deidre Downs, Miss America 2005 -- the last Miss America to be crowned in Atlantic City before the pageant moved to Las Vegas for seven years -- made headlines when she married her girlfriend.
In September, the reigning titleholder, Miss America 2018, Cara Mund, an alumna of Brown University bound for law school, became the first Miss North Dakota to win the pageant.