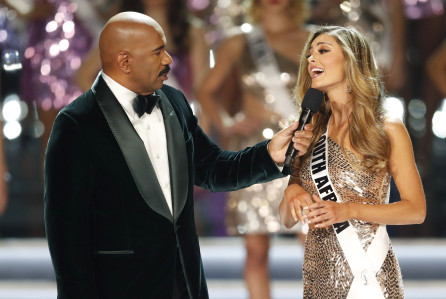 
Miss Universe is heading to Bangkok, Thailand, for the 2018 competition with Steve Harvey returning as host. The 2018 Miss Universe competition will air in the U.S. on Sunday, December 16 (7-10 PM ET live/PT tape-delayed) on Fox.

This will be Harvey’s fourth time hosting the pageant, following his infamous snafu in the 2015 pageant, in which he misread the card and announced Miss Colombia as the winner instead of actual winner Miss Philippines. He returned as host in 2016, telling the Miss Universe Organization that he wanted to personally apologize to the Filipinos for the incident. He also hosted the 2017 Miss Universe pageant, which crowned Demi-Leigh Nel-Peters of South Africa as the winner.

Over the pageant’s 67-year history, Bangkok has hosted Miss Universe in 1992 and 2005, with representatives of Thailand capturing the crown twice in 1965 and 1988.
Source: