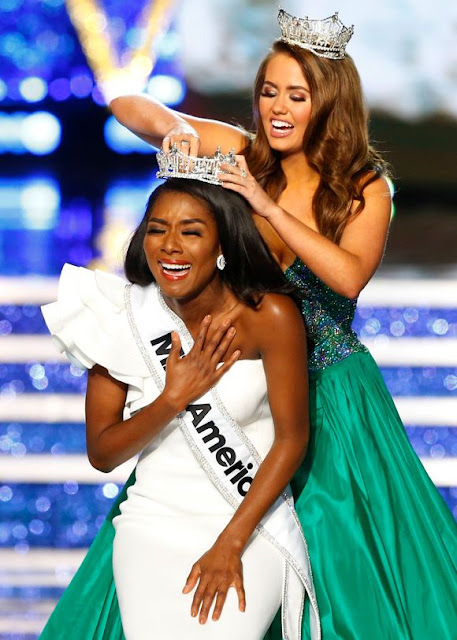 And the crown goes to... Miss New York Nia Franklin.
She edged out her 50 fellow competitors Sunday night in Atlantic City.
After being crowned, Franklin expressed her gratitude.
"I'm feeling really blessed right now," she said. "I want to thank God because without him I wouldn't be standing here. It took a lot of perseverance to get here, and I just want to thank my beautiful family for coming, my mom and my dad, who's a survivor of cancer, and I love him so much. I want to thank all of my sisters behind me. We've had a wonderful week together, and I love each and every one of you."
During the competition, Franklin offered herself as an example when asked how she would promote a healthy body image.
"I would start by sharing my story," she said. "I grew up at a predominately Caucasian school and there was only 5 percent minority, and I felt out of place so much because of the color of my skin.
"But growing up, I found my love of arts, and through music that helped me to feel positive about myself and about who I was," she continued, "and that's what I would encourage women to do – young girls to do is find who they are."
She also explained how being Miss New York prepared her for her next job as Miss America.
"I have New York grit," said Franklin. "I have moved over five times because of subletting in New York. It can be a little difficult because of the pricey rent, but I've overcome that. And also, as a New Yorker, I understand what it takes to work hard. I came up on a Lincoln Center fellowship because I'm an artist, and I'm really excited to just share my platform my social impact advocating for the arts and make sure all students have access to a quality education."
For her talent, Franklin sang "Quando m'en vo' " from the opera "La Boheme," dazzling Twitter with her vocal talent and a gleaming, strapless dress.
"Miss New York nailed the talent competition!" one person on the social media site exclaimed.
Miss Connecticut Bridget Oei was the evening's first runner-up, Miss Louisiana Holli' Conway the second runner-up. Miss Florida Taylor Tyson was awarded third runner-up, while Miss Massachusetts Gabriela Taveras was named the fourth runner-up.
The other contestants rounding out the Top 15 were: Miss Minnesota Michaelene Karlen, Miss District of Columbia Allison Farris, Miss Colorado Ellery Jones, Miss Idaho Nina Forest, Miss Wisconsin Tianna Vanderhei, Miss Indiana Lydia Tremaine, Miss Washington Danamarie McNichol, Miss Nebraska Jessica Shultis, Miss Oklahoma Ashley Thompson and Miss Alabama Callie Walker.
Reigning Miss America Cara Mund was on-hand to crown Franklin. Mund has been at the center of a the organization's latest controversy. In August, she lashed out at the organization's CEO, Regina Hopper, and chair, Gretchen Carlson, in a five-page letter addressing her "Miss America Sisters." She claimed the leaders "silenced me, reduced me, marginalized me, and essentially erased me in my role as Miss America in subtle and not-so-subtle ways on a daily basis."
Mund appeared on "Today" Friday, and though she did not address Carlson by name, said those in charge should be replaced.
“I do think with the lack of confidence there does need to be a leadership change and I think it comes from more than one (individual)," she said. "I think it’s just the culture in general."
Carlson denied Mund's claims in a statement shared to Twitter a few days after the letter's release, which conveyed she was "surprised and saddened beyond words."
"I also want to be clear that I have never bullied or silenced you," her statement read.
Source: USA Today, 9/10/2018