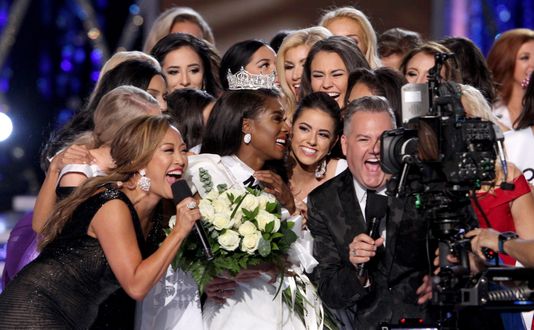 NEW YORK (AP) — The Miss America ceremony subtracted the swimsuit competition for the first time in its 98-year history, and subtracted one million television viewers, too.
The Nielsen company said 4.34 million people watched the annual ceremony on ABC Sunday, down 19 percent from the 5.35 million viewers last year. Declining viewership has been a consistent trend for the pageant over the past few years.
With Miss America now under the leadership of former Fox News personality Gretchen Carlson, the swimsuits were left behind. Instead, they were replaced by onstage interviews where contestants talked about President Trump, the NFL player protests and other topics.
Yet the decision has been the subject of criticism. Minutes before the nationally televised broadcast began, a comedian warming up the crowd mentioned there would be no swimsuit competition, drawing loud boos from the audience.
It was the pageant's lowest viewership since 2009, when it was shown on cable's TLC channel and reached only 3.54 million people. It returned to broadcast TV on ABC in 2011, and its audience has gotten as high as 8.6 million in 2013.
New Yorker Nia Franklin was crowned Miss America on Sunday.
Viewership has declined steadily in recent years, from 7.1 million in 2015, to 6.29 million in 2016 and last year's 5.35 million.
Buoyed by two NFL games, NBC won the week in prime-time, averaging 9.3 million viewers. CBS had 3.8 million, Fox had 3.52 million, ABC had 3.45 million, Univision had 1.32 million, ION had 1.3 million, Telemundo had 1.25 million and the CW had 740,000.
ESPN was the week's most popular cable network, averaging 2.57 million viewers. Fox News Channel had 2.26 million, MSNBC had 1.99 million, USA had 1.38 million and HGTV had 1.35 million.
ABC's "World News Tonight" topped the evening newscasts with an average of 8.3 million viewers. NBC's "Nightly News" had 7.5 million and the "CBS Evening News" had 5.9 million.
For the week of Sept. 3-9, the top 10 shows, their networks and viewerships: NFL Football: Chicago at Green Bay, NBC, 22.12 million; NFL Football: Atlanta at Philadelphia, NBC, 19.03 million; "NFL Pre-Kick Show" (Thursday), NBC, 15.61 million; "NFL Pre-Kick Show" (Sunday), NBC, 15.41 million; "NFL Weather Delay," NBC, 12.76 million; "The OT," Fox, 12.33 million; "America's Got Talent" (Tuesday), NBC, 10.7 million; "Football Night in America," NBC, 10.46 million; "America's Got Talent" (Wednesday), NBC, 9.89 million; "NFL Opening Kick-off Show, NBC, 8.73 million.
Source: USA Today, 9/11/2018