September 08, 2018
UPDATE (9/22/2018): The Chelsi Smith Foundation has been created by Chelsi's family and the Board of Directors to make grants and awards available to those charities and initiatives that were close to Chelsi's heart. Please consider donating via the official website: https://www.chelsismithfoundation.org/

THE PAGEANT WORLD is mourning the loss of one of the most beloved beauty queens of all time, CHELSI SMITH, Miss Universe 1995. According to information posted on Facebook on September 8, 2018 by her mother, Mary D. Trimble, Chelsi had been suffering from a long illness (reportedly liver cancer). 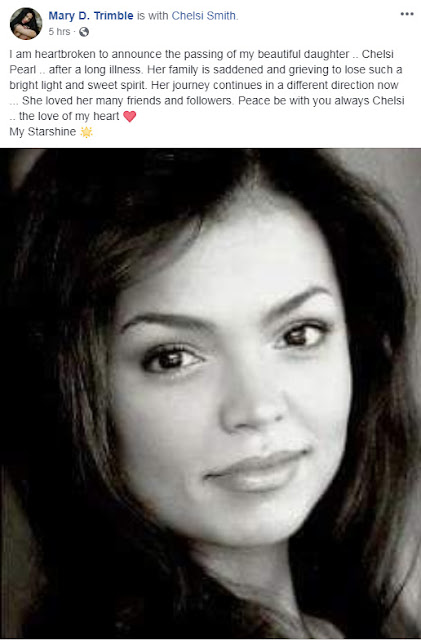 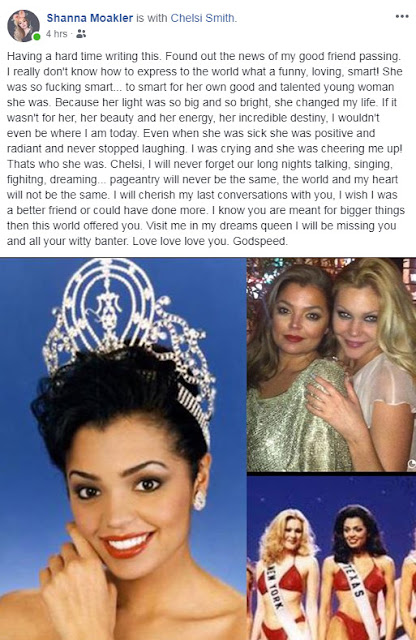 I was totally shocked upon hearing her untimely passing. Her positive, witty, and humorous postings on her Facebook page hardly reflected the condition of a woman - who was still in her prime at 45 - suffering from a fatal disease. Like many of her fans who anxiously waited for her next Facebook post, I started wondering why she had stopped posting since mid-July. It was so uncharacteristic of her.

Chelsi friended me on Facebook on February 10, 2014. At first, I hesitated accepting her friend request because I was not sure whether I was dealing with an impostor or the real deal. I sent her a private message asking if she was the real Chelsi Smith and she quickly shot with "Haha! It's me sweets

" I knew there and then that it was the real thing! I had always wanted to be friends with Chelsi - if not in real life, at least online. Chelsi was actually the first Miss Universe to have befriended me - and I was so thrilled that I would finally get to know her. She even started following Critical Beauty on Twitter. And I added her as a member to the Critical Beauty group on Facebook where she posted regularly.

There is a reason Chelsi had won Miss Congeniality twice - at Miss  Texas USA and at Miss USA: she was the epitome of warmth, ebullience, and pure unconditional love. She loved everyone - even some of her harshest critics like myself. I remember "fighting" with her over the issue of ideal weight for winning Miss Universe. We also debated gun control. In her rebuttals, she was neither confrontational nor egotistical. On the contrary, she always remained calm and gracious. And she would always end with a "love you!" or "hugs."

Then one day, she posted a YouTube link to a sizzle reel for a reality show which never materialized. The title of the reel is "The Reconstruction of former Miss Universe Chelsi Smith (Years 2009-2010)." The title swiftly piqued my interest: what is there to reconstruct about Chelsi Smith? She was Miss Universe, for Pete's sake! She had everything - beauty, talent, fame, and adoring fans. But something was missing: post-pageant luck. At 28, a failed marriage led to an ugly divorce. She gained 70 pounds. Her singing career never really took off. Her acting career was limited to insignificant bit parts. The face that could launch a thousand ships was essentially ignored by beauty-oriented magazines, even by the Miss Universe Organization who never invited her to judge. She became depressed, as past childhood issues returned to haunt her: bigotry due to her biracial identity, her father's schizophrenia, and a mother who abandoned her. Watch:

We all have issues. We all have stories to tell. Chelsi's story may not be unique to itself, but it is remarkably relevant, universally poignant. We cannot help except lend pity to a tortured soul who, heroically, has consoled other tortured souls - online or in person.  After a year of chatting online, I finally met Chelsi in person in Miami Beach during the 63rd edition of Miss Universe held on January 25, 2015. Another beautiful soul, world-renowned fashion designer and pageant coach, Joey Galon, actually introduced me to her. My friend Héctor Joaquín Colón-González - who had never met Chelsi before either - and I decided to join Joey and Chelsi at a restaurant where the pair had just finished dining.

As soon as Chelsi saw me, she rushed to give me the biggest and warmest hug, coupled with a nice peck on the cheek. She made me feel... well... like some sort of royalty. She gave the same treatment to Héctor who quickly fell for her infectious vivaciousness. Later that night, we found ourselves cracking jokes, imitating silly pageant walks and poses, mocking dumb pageant contestants, and having a blast at a gay bar. One pageant fan, who was totally oblivious of the queen's presence, shrieked with joy when I introduced him to her. "Oh, my God! You're Chelsi Smith! I love you!!!" Two other guys recognized her and greeted her. Chelsi couldn't help but be amused by the attention she was getting from her gays. 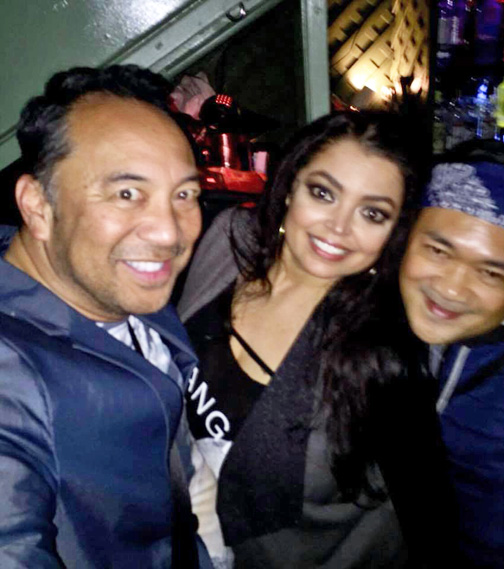 I recall Chelsi's proposal for a get-together in April 2015 to celebrate her 20th coronation anniversary as Miss USA 1995. Two months had elapsed but nothing occurred - at least not to my knowledge. On March 18, 2015, she sent me a private message on Facebook:

We lost touch with each other after this note.

I wanted to think that she was doing okay, that she had gotten her groove back, that perhaps she had become too busy with new projects. I was missing her presence on social media. My news feed had been un-Chelsified.

Chelsi has reappeared on my news feed. But it is no longer she. It is her beautiful, warm, congenial soul speaking through her infinite number of friends, fans, and loved ones.

Chelsi is here to stay. With us. In our minds, in our dreams, in our hearts. 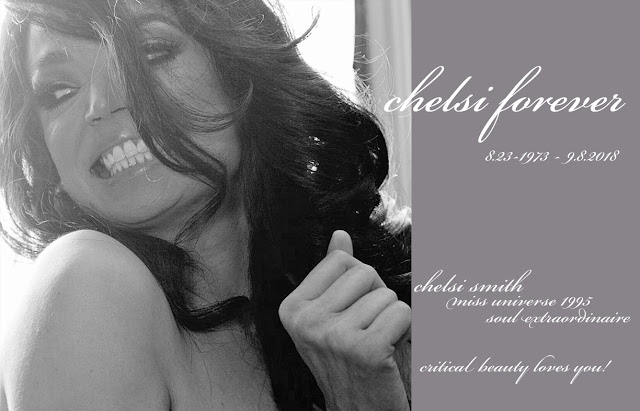