Metro Manila (CNN Philippines, October 20) — A photo with an Israeli fellow has cost a Lebanese beauty queen her title.
Miss Earth Lebanon 2018 Salwa Akar had lost her title after posting a picture with her Israeli counterpart Dana Zerik on Facebook. The photo, which shows the two gesturing a peace sign with their hands, comes with the caption, "My advocacy is to help people find peace and love within themselves so they can love each others (sic) and become peaceful with our mother earth."
Akar, later on, took down the post.
The spokesperson of Israeli Prime Minister Benjamin Netanyahu on Tuesday took to Twitter to react to the revocation of Akar's title. He also condemned "Lebanese apartheid."
View image on Twitter 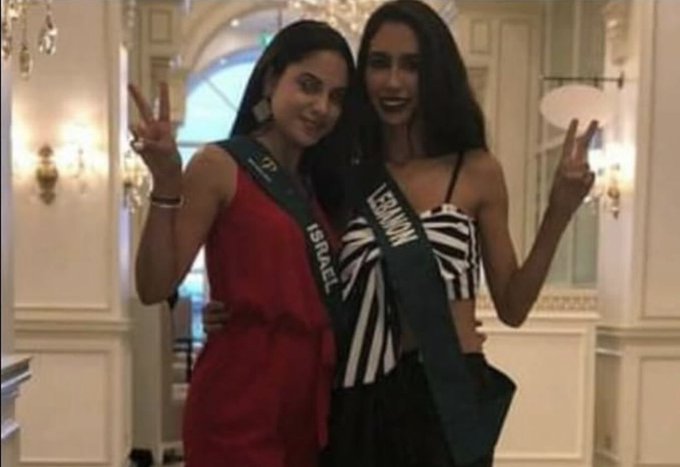 Ofir Gendelman ✔@ofirgendelman
Miss Lebanon Salwa Akar who participates in the #MissEarth2018 pageant had her title revoked today in Lebanon b/c she "dared" to take this photo w/ Miss Israel.

Miss Israel Daza Zreik is an Israeli-Arab, who proudly represents her country.

204 people are talking about this
Twitter Ads info and privacy
In what seems to be an act of defiance, Akar posted on Instagram, saying she would "finish what I started with or without your support and love."


Lebanon and Israel have been at war with each other for years now. In fact, people who hold Israeli-issued passports are prohibited to enter Lebanon. There are ongoing efforts to stop the conflict, but the two nations have still yet to sign a ceasefire agreement.
The management of Miss Earth has yet to comment on the incident.
The coronation night of the annual pageant will be held in the Philippines on November 3.
Source: CNN Philippines, 10/20/2018