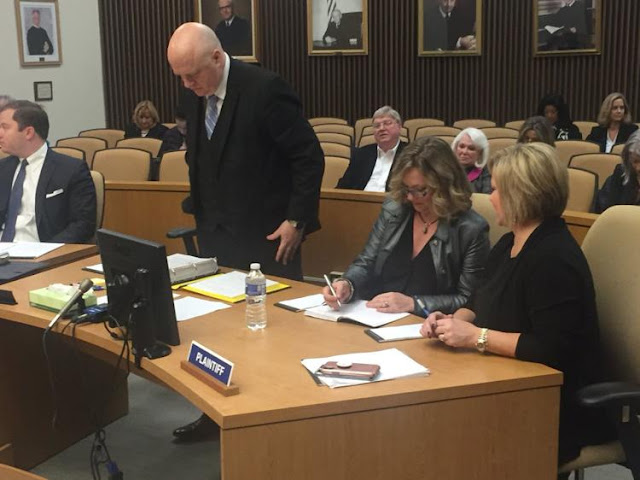 A former board member of the Miss America Organization has voluntarily dismissed a lawsuit she and four former Miss America state licensees filed claiming the group’s new executives unlawfully took control of the MAO.
Jennifer Vaden Barth, a former MAO trustee, announced on social media Tuesday they did not have the funds to move the suit forward.
“At this juncture, I can do no more than what I’ve done.
“This is a reflection of the meritless and misguided nature of her suit and her false and defamatory claims,” the MAO said in a statement. “MAO disagrees with Ms. Barth’s characterization of the dialogue regarding ending this lawsuit and is now assessing its next steps.”
The lawsuit, filed in January 2018, claimed MAO Chairwoman Gretchen Carlson and CEO Regina Hopper orchestrated an “illegal and bad-faith takeover” of the MAO.
The civil lawsuit filed in Atlantic County was not seeking monetary reward, but rather changes to the organization’s structure and governance over the 51 state pageants.
Volunteers with the organization claimed there had been a lack of transparency over the MAO’s decision making, including the elimination of the swimsuit competition and revoking licenses from seven states, including the four named in the suit, West Virginia, Georgia, Tennessee and Pennsylvania.
“I believe there is no real understanding or compassion for the countless volunteers who have dedicated years of service, let alone continually investing in and celebrating the goals and achievements of the exceptional young women who participate,” Vaden Barth said.
Vaden Barth said in her post that after a preliminary injunction hearing two months ago, the MAO put forth an offer to settle.
“I couldn’t accept what MAO offered because I believed it did not include any proposed changes that would ultimately improve the short- and long-term health of the organization,” she said.
Vaden Barth also claimed she put forth her own proposal to improve MAO governance and transparency but was rejected.
She said the proposal did not include changing the makeup of the board, but included suggestions such as that guidelines for board member voting be available to Miss America volunteers and stakeholders online. Vaden Barth said she also asked the MAO to consider amending current bylaws as well as state and Miss America contracts, “so that fair dealings would be explicit and articulated in every way.”
Vaden Barth posted on the GoFundMe page, which went toward securing representation by New Jersey-based law firm Kim & Bae P.C., that legal expenses cost $39,422 over five months for five plaintiffs and public relations cost $2,750.
The GoFundMe page had raised $43,517 toward a $100,000 goal as of Tuesday.
Vaden Barth recommended the $1,345 remaining balance be donated to a scholarship fund — possibly the Miss America Organization or Miss America’s Outstanding Teen — even though she said they had initially planned to use remaining funds for a new organization.
She plans to have an online survey distributed to contributors to make a decision on the donation.
The case was “dismissed without prejudice,” leaving open the opportunity for future litigation within the statute of limitations should the financial resources become available.
“We could bring back the claims, but I don’t anticipate that at this time,” Vaden Barth said.
She said her decision also ensures the MAO cannot silence detractors through other legal means, such as non-disparagement agreements or threats of future litigation.
“I am proud that we have spoken truth to power and that anyone who chooses to become involved with this program will at least know the truth thanks to the actions we have brought forth,” Vaden Barth said.
Miss New Jersey Pageant Executive Director David Holtzman, who was installed in December, said he interacted with the national leaders when he appealed to get New Jersey’s license back. He called the new leadership “refreshing.”
“I’m glad it’s over,” he said. “This organization’s trying to survive, but things like (the lawsuit) make it difficult.”
New Jersey, New York and Florida pageant organizations have had their licenses reinstated and new directors appointed after appeals.
Tennessee, Georgia and Pennsylvania had new licenses awarded to new, separate pageant entities, and West Virginia is looking to start a new one as well.
While Holtzman said he doesn’t believe his state organization was affected by the lawsuit, Vaden Barth doesn’t think it will be a quick change for volunteer efforts to follow the new leadership.
“I don’t think you’re gonna see something happen overnight one way or another. It won’t be like people snap and fall in line, but also, I don’t think it will be a mass exit from the organization. People are going to have to decide for themselves,” she said.
Source: Press of Atlantic City, 3/5/2019