The former Uruguayan beauty queen whose body was found hanging in a Mexico City hotel might have had ties to a high-end escort ring, according to Spanish-language news outlets.
The body of Fatimih Davila Sosa, 31, was found early Thursday in the neighborhood of Napoles, and her death is being probed by authorities.
Spanish media reports said Davila Sosa’s name came up in a 2012 book about an investigation into sex trafficking.
No one was ever brought to trial in the case, but the book by journalist Javier Benech said models were lured into the network with the promise of fame and more job opportunities, according to El Pais. The ring allegedly tried to convince young models and pageant queens that sleeping with powerful men would boost their careers.
Investigators reportedly wiretapped one of the operation’s associates and recorded his conversations with Davila Sosa. The former beauty queen allegedly told him she spoke with the network’s leader about how to “make myself more well-known” since “nobody cares about the Miss Uruguay title,” according to Benech.
Davila Sosa was supposedly visiting Mexico City this week ahead of a job interview. Her Instagram account — which states she’s a Mexico-based model — includes a slew of glamour shots from professional photo shoots.
With Post wires
Source: New York Post, 5/3/2019 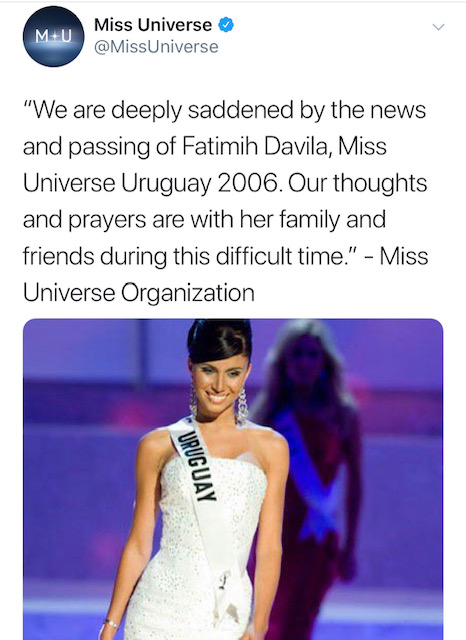