Miss India Pageant Under Fire For Its All-White Contestants 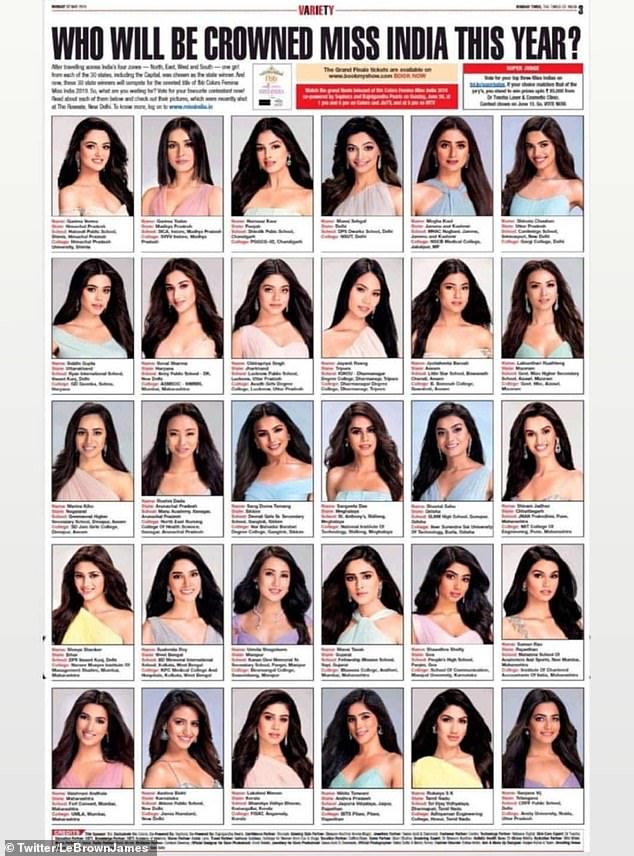 The Miss India beauty pageant has faced criticism over a lack of diversity in its finalists.
The organisation came under fire after a newspaper published headshots of all 30 women competing to take  the crown.
Twitter user LeBrown James shared a photo of the collage, asking: 'What's wrong with this picture?'
The question sparked dozens of responses from social media users who pointed out that all the women have 'fair skin', with one saying simply: 'This is so white!'
Colourism in India pre-dates colonialism to the 1600s, when social hierarchy was based on a caste system and manual labourers often had darker from spending days outside working. This made it more desirable to have lighter skin.
The issue was compounded during the colonial era and eventually became so ingrained that in the 1970s India's first 'fairness' cream, Fair and Lovely, was launched.
The market is expected to be worth 50bn rupees ($716m; £566m) by 2023.
The Miss India finalists won regional competitions across the country and will now take part in the national finals next .
Ahead of the event, the Times of India dedicated an entire page of the newspaper to featuring short profiles of each of the women, accompanied by headshots. 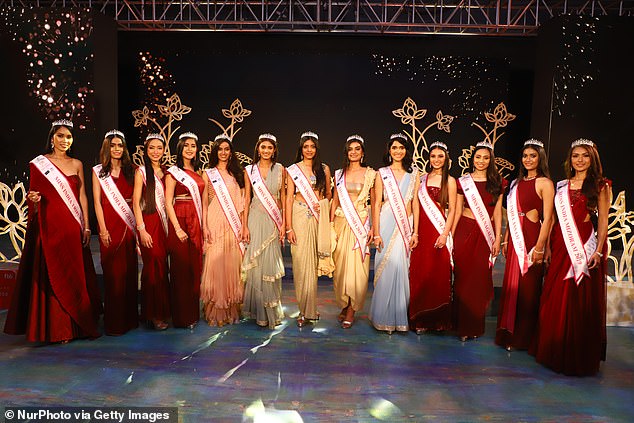 They were published under the headline: 'Who will be crowned Miss India this year?'
James was among the social media users struck by the apparent similarities in the contestants' appearance.
Followers were quick to agree. One posted: 'Same beauty filter has been used on everyone leaving no scope for diversity and inclusiveness.'
Another commented: 'They’re all fair toned women of colour, look almost the same and represent the idea of “ideal beauty” in our country.'
A third pointed out: 'Because competition is about beauty and this is what they consider as beautiful...'
The winner of Miss India will go on to represent India at the Miss World pageant in Thailand in December.
Miss India has been a career launchpad for a number of past contestants, including Priyanka Chopra, who came runner-up and won Miss World in 2000, and Bollywood superstar Aishwarya Rai, who came runner-up and won Miss World in 1994.
The rules have since changed so the winner of Miss India represents the country in Miss World.
Another pageant, Femina Miss India 2019, raised some questions this week, after the 30 state winners were unveiled - all boasting similarly light skin.

Colour bias in India and its history

Colourism in India began before colonialism in the 1600s, when social hierarchy was based on caste systems.
The wealthy, royals and priests were at the top, while those with labour jobs were at the bottom.
Those working agricultural jobs in the fields became darker due to their sun exposure, starting the association that those with darker skin were lower in social hierarchy.
This was further ingrained into society during the colonial times, when European invaders cemented the belief that those with lighter skin were more powerful and therefore had  to more privileges.
The common belief was that those of higher social hierarchy weren't as exposed to the sun as the lower castes, and could stay indoors.
A Washington University Global Studies Law Review found that invaders including Mughals, Portuguese, and British came to India as early as AD 712.
They note that 'Arab and Muslim invaders, including the Mughals, came from the Arabic and Persian Belt and had a fairer skin tone than the majority of the local Indian population', and were seen as more powerful.
The belief became so ingrained into society, that India's first fairness cream 'Fair and Lovely' for women was introduced in the 1970s.
In 2005, India's first fairness cream for men followed, Fair and Handsome, and was even endorsed by Bollywood superstar Shah Rukh Khan.
The market for women's fairness products is expected to be 50bn rupees ($716m; £566m) by 2023.
According to Kavitha Emmanuel, the founder of Women of Worth, colourism often starts from birth, where parents favour the children with lighter skin.
Some of the biggest Bollywood stars, including Priyanka Chopra, Deepika Padukone and Aishwarya Rai, are widely considered to have a lighter 'more desired' skin tone.
However in recent years colour bias has come under fire, with a 'Dark is Beautiful' campaign launching in 2008, started by Kavitha Emmanuel.
In 2013, Fatima Lodhi, from Pakistan, launched a Dark is Divine campaign, speaking to children in school across India.
In answer to the rising backlash, in 2014, the Advertising Standards Council of India (ASCI), issued guidelines banning commercial to depict those of darker skin as 'unattractive, unhappy,  or concerned'.
By Jessica Rach