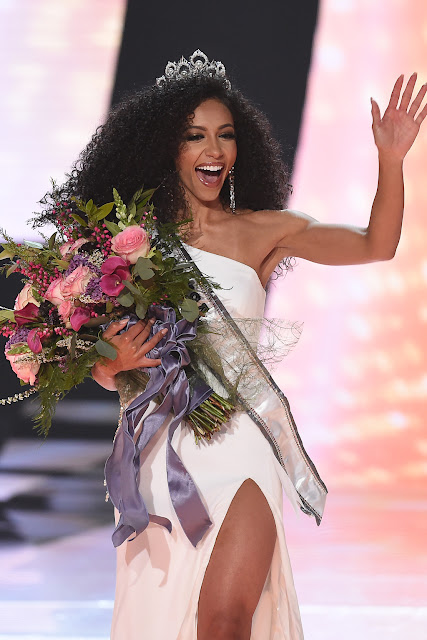 Miss USA 2019 has crowned its winner: Miss North Carolina USA Cheslie Kryst!
During the live competition on Thursday evening, 51 female contestants — representing all 50 states and the District of Columbia — competed for the coveted title.
After Miss Oklahoma USA Triana Browne was named second runner-up and Miss New Mexico USA Alejandra Gonzalez was named first runner-up, Kryst, 28, was crowned Miss USA 2019. The other two finalists were Miss Arkansas USA Savannah Skidmore and Miss Nevada USA Tianna Tuamoheloa. Completing the top 15 were the delegates from the District of Columbia, Florida, Kansas, Maryland, Ohio, Hawaii, Iowa, Louisiana, Minnesota and Pennsylvania.
Kryst, “a full-time attorney that is licensed to practice law in two states,” according to her Miss USA bio, was crowned by her predecessor, Miss USA 2018 Sarah Rose Summers.
This year, the winner was chosen by a selection committee, which was comprised of accomplished female entrepreneurs, business leaders and industry experts, including former pageant winners.
The contestants included women working in numerous fields, such as journalists, entrepreneurs, a Physical Operations Specialist in the U.S. Army Reserve, doctoral students, active and aspiring attorneys, and first-generation Americans, among others.
Kryst is the third woman from North Carolina to win the crown. She will now represent the United States in the next edition of Miss Universe pageant whose date and venue have yet to be announced.
Source: People Magazine, 5/2/2019; Critical Beauty