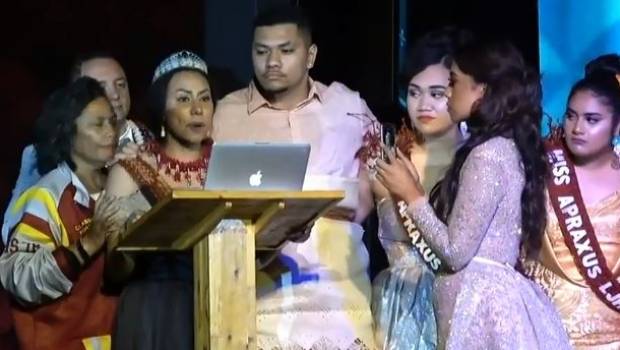 The reign of Auckland student Kalo Funganitao as Tonga's Miss Heilala has been wiped off the official records after she accused the pageant of bullying.
Her speech last week at the Miss Heilala pageant in Nuku'alofa stirred controversy across the Pacific, with calls for pageants to come to an end, for the deputy prime minister of Tonga to resign and for young women to challenge authority.
The Tonga Tourist Assocation, which operated the Heilala Festival, issued a statement on Friday hitting back at Funganitao.
It said she had failed to perform her duties as Miss Heilala 2018-19 and had therefore forfeited her title. It said the runner up would be retrospectively named as Miss Heilala 2018-19
Before handing over the crown to this year's , Funganitao delivered a fiery speech which accused the pageant organisers of not supporting her, highlighted serious claims of cyberbullying and said the experience had been traumatic for herself and her family.
Her speech was not well received on the night. She spoke to a chorus of jeers and some support, before her microphone was cut off and music was played to drown out her speech.
"I have experienced just how hard it can be to be a young Tongan woman. I have dealt with people in official roles and in other places, in the work force that have been unprofessional and rude and just straight out mind-boggling," she said.
A local reporter from Matangi Tonga said they overheard Deputy Prime Minister Semisi Sika telling the DJ to  loud music over Funganitao. That allegation, which Stuff has repeatedly contacted the ministry for comment on, has led many in Tonga to call for Sika to step down.
In an interview with Stuff, Funganitao said the crowd and other contestants had bullied her when she was crowned Miss Heilala last year.
"The night that it happened, I got a lot of boos. As I was going up to revive my sash for those first places there were just more and more boos and then when I was crowned it was overwhelming how angry people were," she recalled.
"The team that I was with and my family had to form a protective barrier around me as I was going down the stage, and going out to the car, because there were actually people who were trying to cut through so that they could, I don't know..."
The Tonga Tourist Association, which was overseen by Sika, has not responded to Funganitao's allegations.
Its only public response has been to strip her of her title.