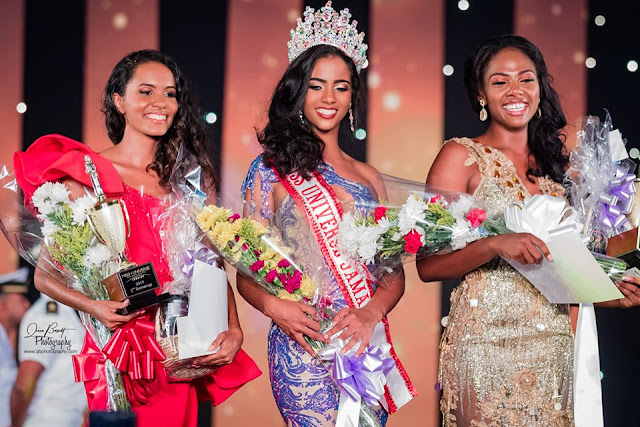 Miss Universe Jamaica 2019 Iana Tickle Garcia believes many of Jamaica's youth are voiceless and are not afforded opportunities to make a difference in society. She hopes to be a change agent for the marginalised during her year-long reign.

“I want to get the youth more involved because right now they feel like they don't have a voice. They feel they are unimportant, but it's for them to understand that they too can make a difference in the society,” she said.
The 19-year-old former Montego Bay Community College student was crowned in a spectacular grand coronation showcase at the National Arena Saturday night. She also won the Sectional Prize for Best in Evening Gown.

“I never thought that I would be standing here with the Miss Universe Jamaica title, and I am so happy right now,” Tickle Garcia said in a post-pageant interview. “There are a lot of causes, such as the environment, that are being overlooked, and I want to let my voice be heard where that is concerned. I Also felt that this was the year for me to come out of my comfort zone and for me to also experience personal growth.”
She has her sights set on attending the University of the West Indies, where she has been accepted to study International Relations and Law.

Tickle Garcia will represent Jamaica at the Miss Universe  at a date and location to be announced.
Toni Ann Lalor, a 25-year-old farmer from Wigton, Manchester, was first runner-up.

“I envisioned myself wearing the crown, however, I support the new queen and I believe that she will do us proud,” said Lalor, a graduate of the Edna Manley College for the Visual and Performing Arts.

“I have been a farmer for seven to eight years now. It's the proceeds from farming that I used to send myself to the Edna Manley College,” Lalor added.

Sian Graham Connolly, who finished third, stated that beauty pageants have a lot to offer to young women.
“I believe that pageants are an amazing experience despite the outcome. You can achieve so much and you can build yourself as an individual. You can also gain opportunities that can take you far in life,” she said.
The 20-year-old Graham Connolly resides in St Ann and is in her third year at the University of the West Indies, where she studies Psychology.

Although getting off to a late , the event was entertaining with singer Gem Myers opening proceedings with a lively set, complemented by dancers. Alaine, Gyptian and 2016 Digicel Rising Star winner Elton Earlington also performed.

Beadle, Henry and Hemmings joined Tickle Garcia, Lalor and Graham Connolly in the Top six.
After the top-three finalists were announced, they were asked the question: “The Miss Universe Jamaica tagline is 'Confidently Beautiful while enhancing lives'. Explain what this means to you, and how would you apply this concept to your reign as Miss Universe Jamaica 2019.”

Tickle Garcia, Lalor and Graham Connolly were placed in a secluded area, which prevented them from hearing the question and their response.

Minister of Culture, Gender, Entertainment and Sport, Olivia Grange, crowned the new queen in the absence of last year's winner Emily Maddison, who is overseas studying.