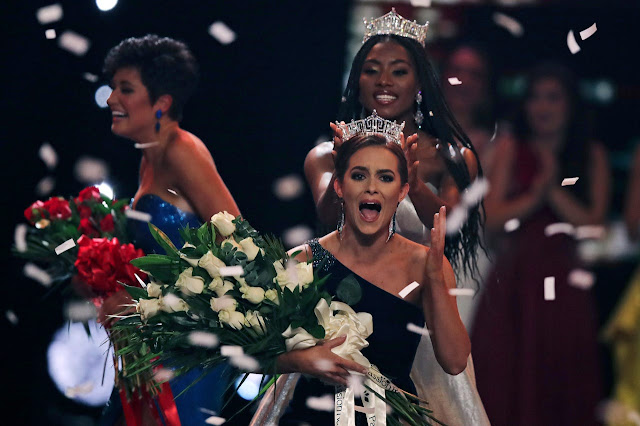 Schrier was awarded a $50,000 scholarship and “the job of Miss America,” succeeding 2019 Miss America Nia Franklin, a classically trained opera singer from New York.
Schrier, a student in the doctor of pharmacy program at Virginia Commonwealth University, touted her science background from the start, telling judges Kelly Rowland, "Queer Eye" star Karamo Brown and "Superstore" actress Lauren Ash that she's "had people who think that what I do is not necessarily a talent."
Victoria Hill of Georgia, a passionate foster care advocate, was named the first runner-up and was awarded a $25,000 scholarship.
The competition, now dubbed “Miss America 2.0,” has seen multiple changes since it ditched swimsuits last year in an effort to keep up with the times. No longer referred to by organizers as a “pageant,” Miss America left its longtime home in Atlantic City this year and took place for the first time at the Mohegan Sun casino in Uncasville, Connecticut.
It was a night of a lot of talking and not much else. Here are some moments you may have missed (including a bunch of grumbling on Twitter).

Instead of bathing suits, it had …

The 2.0 vibe was clear from the start. The show opened with contestants lounging around the stage as if in a giant Vanity Fair cover shoot and grouped by their specialties instead of regions: STEM, the business world, the arts & media and educators & advocates.
Each contestant introduced herself by touting her accomplishments and aspirations, with comments including pearls like: "Yes, climate change is real"; "My real passion is rehabilitating rape survivors like me"; "Shaking the world in a gentle way"; and even a greeting in Chinese from the contestant from Maine.

Mental health was front and center
Schrier's first moment to shine came when Brown asked, "How do you support parents who do not have knowledge about mental health or have access to it?"
"It's education, and it comes back to sharing your own story," she responded. "I'm someone that has struggled with mental health disorders my entire life. I'm diagnosed with obsessive-compulsive disorder and recovered from an eating disorder, which is why I'm so excited about Miss America 2.0, because we've taken the focus away from our bodies and been able to show exactly what women can offer outside of our appearance."
Ash followed up, asking: "Anyone out there who might be dealing with a new mental health diagnosis like yours, what's your message to them?" Schrier's response was succinct: "Don't be afraid. Go seek help and just really be yourself."


Talent shines, even in the dark

The top five finalists were the only ones who got to demonstrate their talents for the TV audience. But it didn't all go as planned.
First up was Simone Esters of Missouri, dressed in a sparkly white and yellow outfit, who performed a baton-twirling routine mostly in the dark. Flashing stage lights were unable to keep up and oddly there was no main lighting to feature what Esters was doing.
Brown gave her an encouraging review, saying: "Simone, the lighting was not that great on you, but you know what? You still shined great, honey."
Reviews from 2019:'Miss America just isn't the same': Twitter rips new red carpet competition

The new format, which was a lot of talking and not much else, didn't sit well with many fans.
Some lamented quizzical attempts at modernization, including a last question that saw the final two contestants passionately advocating for why Miss America should be unmarried and childless.
"The final question about whether Miss America should be single and childless...completely undid any feminist progress made through this production," tweeted @carofinew.


Others just longed for aspects of pre-2.0, like @bharvell_, who missed the evening gowns …


… and @savannah_zuk and @bbash913 who wanted the outgoing Miss America to have one last time to shine.


And many were just waiting for something to happen. "okay I understand no swimsuit, but can we go back to more of the traditional Miss America competition??" @madicott12 tweeted. "like we haven’t seen any of the women competing and it’s cut to top 7."


Twitter user @SydneySmith92 might have summed up many reviewers: "What on earth have they done to the Miss America pageant?? They better have a 3.0 version in the works because this format is an absolute train wreck."