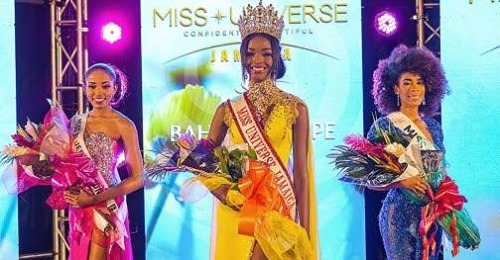 THREE years after withdrawing from the competition due to a family tragedy, 23-year-old Miqueal-Symone Williams was crowned Miss Universe Jamaica in a pre-recorded final on Saturday night.

Despite winning the title, Williams — who wore the sash Miss QORIHC — had one regret.

“I really wish my mother was here to see this,” she told the Jamaica Observer. “But I'm overjoyed. I'm so grateful to so many people for supporting me and believing in me. I am happy I could make them proud.”

Williams's mother was murdered in 2017, causing her to step away from the competition that year.

Selected from a field of 10, she also won the sectional prize for Best in Evening Gown. Williams felt confident going into the finals.

“Without confidence, you are twice defeated in the race of life. I expected to win because I put in the work to get here, and also because I am confident in my ability to reign as this year's Miss Universe Jamaica,” she said.