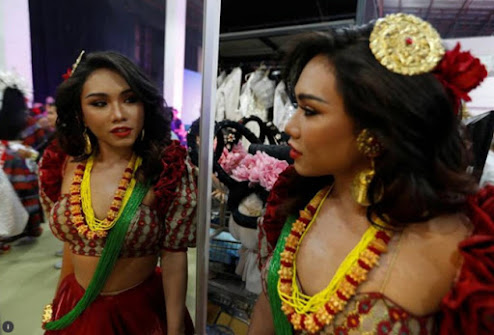 KATHMANDU, Dec 29 (Thomson Reuters Foundation) - When Angel Lama sashays down the catwalk in the Miss Universe Nepal finals on Wednesday she will make history as the first transgender woman to be a finalist in the Himalayan nation's most glamorous annual event.

Nepal ranks among fewer than a dozen countries in the world that accept trans contestants in their national pageants and only the third in Asia after Myanmar and Mongolia, according to LGBT+ activists.

The move comes after new management relaxed the criteria for height, weight and appearance, and allowed any "bold, beautiful and confident woman" between 18 and 28 years to participate.

"I have come to Miss Universe Nepal to show the diversity of people in the society," Lama, 21, told the Thomson Reuters Foundation, who will compete against 17 other finalists.

"If I stand on that stage and showcase this, that will be the biggest crown ever."

Majority-Hindu Nepal has become more accepting of LGBT+ people since a decade-long Maoist insurgency ended in 2006 and the feudal monarchy was abolished two years later. In 2008, an openly gay legislator was elected.

The Supreme Court ruled on an anti-discrimination measure in 2007 and put in place measures to guarantee LGBT+ people equal rights as citizens, leading to the first Pride parade in 2010, and committed to including LGBT+ people in its 2021 census.

For Nagma Shrestha, national director of the Miss Universe Nepal organisation, "everyone is equal, whatever their sexual orientation".

"If they say they are women, they are women, and they should be treated like women," said Shrestha, 29, who was the first Miss Nepal to represent her country in the Miss Universe contest in 2017.

She said she changed the rules to allow trans women to compete as she had always wanted to do "something good" for LGBT+ people. The 18 finalists will take to the catwalk in swimsuits and gowns with the event televised live.

"It is super-special for me," said Shrestha. "I want to amplify the message for inclusivity through the pageant which is very important now."

Nepal, along with Pakistan, India and Bangladesh, legally recognises transgender people, which often include intersex people and eunuchs, as a third gender.

But some families still find it hard to accept trans people.

Lama said her parents, who did not have any formal education, wanted their child to get married and have a family, but instead she opted to work for the Blue Diamond Society, an LGBT+ rights group.

In 2018, she competed in an LGBT+ pageant and was crowned Miss Pink Nepal, which helped her family come to terms with her as a trans woman, Lama said.

"I could openly say that I am a trans woman and my mom slowly started accepting me," she added.