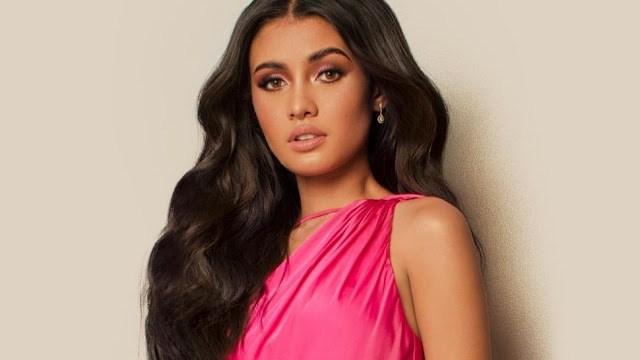 Miss Universe Philippines 2020 Rabiya Mateo is speaking her truth on Instagram Story on Tuesday evening after a leaked edited video of her is seen circulating online.

In one of the segments, Rabiya mentioned that her dream was to become an actress and if given a chance to play one, she would love to play the role of the antagonist.

The vloggers then challenged her to live her dream and gave her a scenario where she won the Miss Universe crown. However, the First Runner-up disagreed with the results.

Rabiya complied and acted her heart out.

She even had her final line all thought out: “I'm a Filipina, so don't mess with me!”

The sad news reached the beauty queen, prompting her to respond to her bashers on her personal Instagram account.

She said, “This needs to stop. This video was cut, and some people are making issues out of this and trying to bully me on IG.

“In the first part of the video, which was not included here, we talked about the fact that if I'm gonna accept any role in the future, I wanted to be an antagonist because I really wanna challenge myself.

“The hosts gave me a situation, and I had a disclaimer that this is just a role -- before and after this video -- which was also cut.” 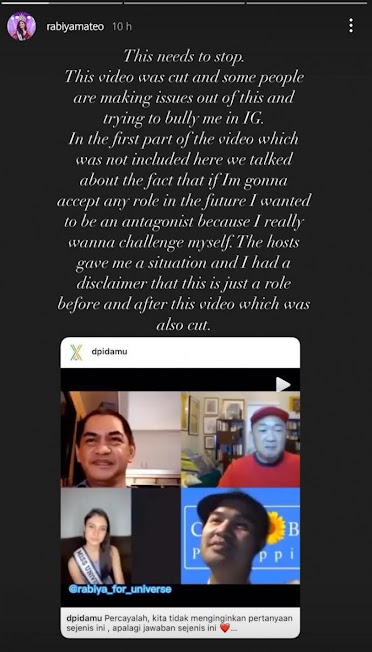 In a follow-up post, Rabiya said she has never done anything to discredit or “insult other candidates,” and that pageantry is all about empowering and uplifting women.

“I have never done anything to discredit or insult other candidates, but putting words in my mouth and creating problems out of nothing is just toxic and it has to stop,” she said.

“No one should be bullied (even public figures) because that is unkind and pure evil.

“We can support our own candidates without destroying others. This needs to stop. I have nothing but love and admiration for Indonesians.”

She continued, “Pageants should be fun. We need to create a positive image in empowering women.

“I know bashers will always be there, but can we not normalize things that are evil and not right? Hatred is an acquired behavior. We can surely unlearn it and start doing the right thing.”