In Israel, Miss Universe Says Pageant No Place For Politics 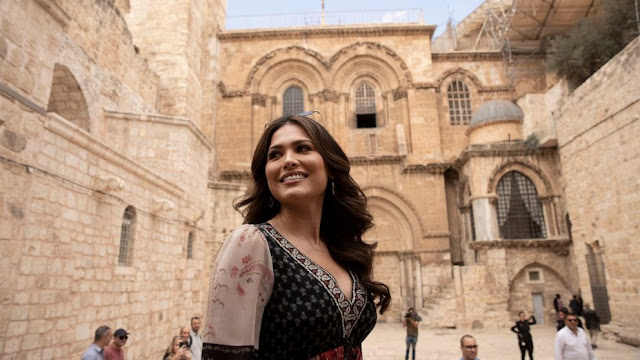 JERUSALEM -- The reigning Miss Universe said Wednesday the long-running beauty pageant shouldn't be politicized, even though its next edition is being held in Israel amid pressure on contestants to drop out in solidarity with the Palestinians.

The 70th Miss Universe pageant is being staged in the southern Israeli resort city of Eilat in December. Dozens of contestants from around the world will arrive there in the coming weeks to compete in national costumes, evening gowns and swimwear. They'll also have their public speaking prowess tested with a series of interview questions.

But the pageant is in the spotlight for being held in Israel amid boycott calls against the country over its treatment of the Palestinians. At least one country has already called off their participation.

“Everyone with different beliefs, with different backgrounds, with different cultures, they all come together and when you are in there you forget about politics, about your religion," Andrea Meza, the current Miss Universe, told The Associated Press ahead of a tour of Jerusalem's Old City, the epicenter of the Israeli-Palestinian conflict. “It’s just about embracing other women.”

Meza, 27, represents Mexico and was crowned in May, during a COVID-delayed ceremony in Florida, where contestants accessorized their sparkling gowns with face masks. She hands over the crown in Eilat on Dec. 12.

Hosting the show is a coup for Israel, which for years has been confronting a grassroots Palestinian-led international campaign calling for boycotts, divestment and sanctions. Israel hopes the pageant will help draw tourists and project an image of Israel as a safe destination during the pandemic.

Paula M. Shugart, president of the Miss Universe Organization, has said Israel has been on the shortlist of host countries “due to its rich history, beautiful landscapes, myriad of cultures and appeal as a global tourist destination.”

But contestants are facing pressure to boycott the event and set aside hopes for the crown to make a political statement.

PACBI, a Palestinian activist group and founding member of the boycott movement, called on contestants to “do no harm to our struggle for freedom, justice and equality by withdrawing from the pageant.”

Citing COVID, Malaysia has announced it won't send a contestant. And South Africa’s government said it was withdrawing support for the country's representative over her participation in the event.

“The atrocities committed by Israel against Palestinians are well documented,” the government said in a statement, adding that it “cannot in good conscience associate itself with such.”

Both countries are strong supporters of the Palestinians.

Israel's Foreign Ministry declined to comment and requests for comment to the country's Tourism Ministry, which hosted Meza's visit to the Old City on Wednesday, were unanswered.

The boycott movement’s impact has been a mixed bag. It has notched a number of successes over the years, with major artists like Lorde and Lana Del Ray cancelling appearances because of Israel’s policies. But big stars still have made stops in Israel and major events like the Eurovision song contest - which included a performance by Madonna - have been held in the country despite high-profile boycott calls.

The Miss Universe pageant will draw contestants from Morocco and the United Arab Emirates - Arab countries that recently normalized ties with Israel.

The boycott movement, known as BDS, promotes boycotts, divestment and sanctions of Israeli institutions and businesses in what it says is a nonviolent campaign against Israeli abuses against Palestinians.

Israel says the campaign is an effort to delegitimize and even destroy the country, and claims its motives are anti-Semitic. BDS leaders deny allegations of anti-Semitism, saying their campaign is against Israeli policies.

Meza said she didn't fault women who wanted to sit out this year's contest but she said she had no problem with the competition being held in Israel.

Jerusalem's Old City, home to sensitive Jewish, Muslim and Christian holy sites, lies at the heart of the decades-long conflict. Israel captured east Jerusalem, including the Old City, along with the West Bank and Gaza Strip in the 1967 Mideast war.

Israel later annexed east Jerusalem — a move not internationally recognized — and considers the entire city its capital. The Palestinians seek all three territories for a future independent state, with east Jerusalem as their capital.

Wearing a flowing, full-length dress with flat sandals, Meza meandered through the mostly empty cobblestoned alleyways of the Old City, stopping to peek into shops as a media scrum followed. Vendors, unaccustomed to seeing throngs since the onset of the pandemic, stared and wondered aloud about the attention Meza was drawing.

Meza, who is a software engineer, said she was “just a girl,” from a small town in Mexico who was not a “perfect and flawless” beauty queen. She said she had worked hard to become Miss Universe and that the competition wasn't only about parading women in bikinis but also about testing their intelligence.

Asked if she could offer a solution to the conflict between Israel and the Palestinians, she said she didn't believe in violence and that communication was key.

“People have to make compromises and I really hope that we can make this through talking and conversation,” she said.