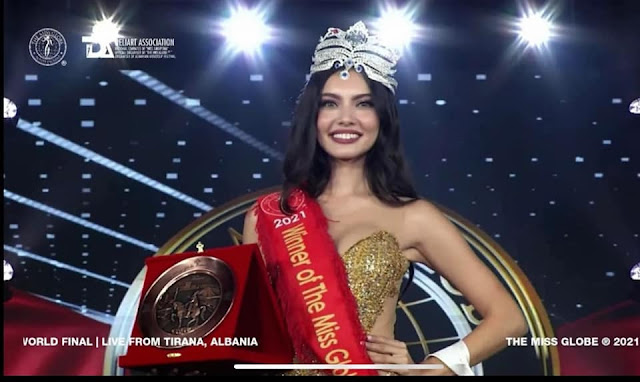 Maureen Montagne of the Philippines has just been crowned The Miss Globe 2021 in Albania. Mabuhay! The 28-year-old Filipina bested over 45 contestants to win the crown.
Her court includes:
1st RP - Nigeria - Esther Ogechi Gabriel2nd RP - Turkey - Melike Bali3rd RP - Venezuela - Jhosskaren Carrizo Orozco4th RP - Canada - Hailey Hamelin-Wilson👉🏽I think Philippines had already been selected as the winner before the pageant even began. Immediately after the top 5 Q & A, the male judge came up on stage and read the results from the cards that the host was handing to him. There was NO deliberation of the judges. Just sayin’. Nevertheless, Maureen deserves the crown. 👸🏼This is the third International crown that the Philippines has won within five weeks. On October 3, Alexandra Faith Garcia won Miss Aura International 2021 in Turkey, followed by Cinderella Obeñita winning Miss Intercontinental 2021 in Egypt on October 29.