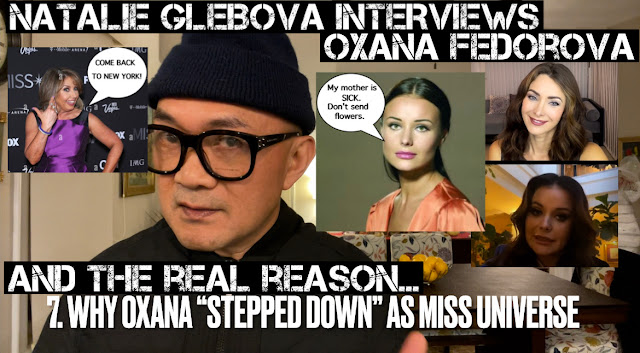 The interview was conducted via Natalie Glebova’s Instagram account on December 26, 2021. The chat was interesting because it was the first time for me to hear Oxana speak English. There were seven main issues that were brought up during the entire chat which lasted just a little under an hour.

First, the Gucci dress that Oxana wore during the finals. Second, Natalie mentions that fans have compared her to Oxana and suggested that she copied Oxana's look Third, how destiny played a role in Oxana becoming Miss Universe Fourth, Natalie promotes her "winning the crown" philosophy which Oxana wholeheartedly supports .

Fifth, Natalie brings up the question that Oxana answered during the final Q & A, "What makes you blush?" and how the interpreter botched her answer Sixth, the importance of proper breathing which is the key to controlling your nerves Seventh, Oxana explains the reason why she stepped down as Miss Universe - or at least her version of the story. Toward the end of this vlog, I reveal the real reason Oxana lost her Miss Universe crown!