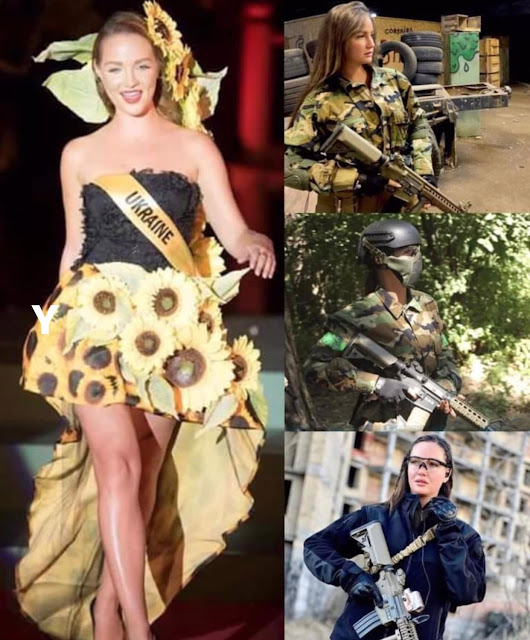 Anastasiia Lenna was crowned a national pageant winner aged 24 in 2015, as she dazzled in dresses and high heels but the model has swapped her glamorous lifestyle to put her body on the line for Ukraine.

The brave model's step into the battlefield to defend her country is a far cry from her previous job working across Turkey as a public relations manager.

According to her Instagram highlights titled Airsoft, Anastasiia is no stranger to wielding a weapon albeit those that typically fire plastic projectiles rather than real bullets.

Streams of snaps show her in full military gear in wooded arenas and indoor training grounds over the past couple of years but now she will be hoping her experience comes in handy.

Since Vladimir Putin waged war on Ukraine this week, the former beauty queen has been using her platform of over 40,000 social media followers to rally support for her country.

She warned Russian troops: "Everyone who crossed the Ukrainian border with the intent to invade will be killed!"

Another post expressed her pride in Ukraine's resistance so far which has already seen Russia lose more men than Putin had encountered for, according to intelligence.

Anastasiia said: "Our army is fighting in such a way that NATO should apply for entry into Ukraine."

Sharing content praising the example set by Ukraine's former comedian president by walking among soldiers, she wrote: "A true and strong leader. This is the President of Ukraine"

Anastasiia also shared a plea from world champion boxer Usyk Oleksandr who appealed to his Russian social media followers to not send loved ones into battle with Ukraine.

The marketing and management graduate from Slavistik University in Kyiv has called on her follow country people to remove all road signs to make it harder for invading troops to navigate through Ukraine.

A translation of her call to action reads: "Dismantling road signs on all roads of the country. The enemy has a pathetic connection, they don't orientate the terrain. Let's help them go straight to hell.