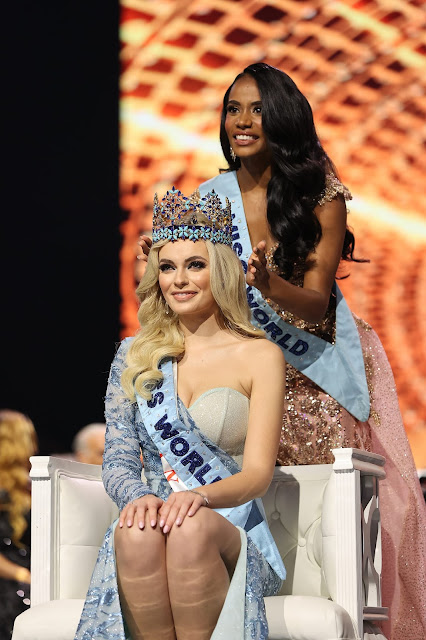 Poland's Karolina Bielawska won the Miss World 2021 crown amidst controversy in a gala that was held at the Coca-Cola Music Hall in San Juan, Puerto Rico. This is the second time Poland won the crown, the first being in 1989 with Aneta Kreglicka.

The other two finalists were United States' Shree Saini and one of the favourites to win the 70th edition of the gala, Olivia Yace, from the Ivory Coast.

"When I heard my name, I was surprised, I still can't believe it, I feel honoured," said Bielawska after being crowned by Jamaican Toni-Ann Singh, who won the 2019 edition.

The 23-year-old model, who is studying for a master's degree in administration and enjoys doing volunteer work, decided to be "more authentic" and "enrich the lives" of other people.

"If you want to discover something new, try to learn to be richer in empathy, gratitude and compassion," she answered in the round of questions.

Controversy sparked during the gala due to legal problems between the organisers and the fact the no Latina candidate made it to the Top 12.

The final of the contest was scheduled for December 16 at the Puerto Rico Coliseum, but it had to be postponed after 38 positive COVID-19 cases were recorded between candidates and staff.

The top 12, which this time was made up of 13 women due to a tie, included candidates from Vietnam, Mexico, Northern Ireland, the Philippines, Poland, Somalia, the United States, Colombia, the Czech Republic, France, India, Indonesia and the Ivory Coast.

Some of the main favourites such as Venezuela's Alejandra Conde and the Puerto Rican Aryam Diaz.

PRwaP demanded the payment of 1,225,000 dollars, a sum earned from public funds that the former Puerto Rican beauty queen allegedly had not returned.

Del Valle countersued PRwaP, requiring more than 31 million dollars for moral damages, and announced that she would not participate in the Miss World 2021 final events.

In fact, the attendees showed their support to Del Valle and booed some of the organisers or sponsors of the event, such as the cryptocurrency mogul Brock Pierce, who is in charge of PRwaP, and the president of the Miss World Organization, Julia Morley.